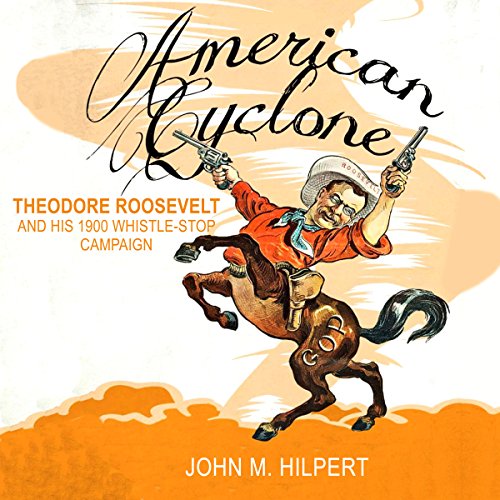 When Theodore Roosevelt entered national politics as the Republicans' nominee for the vice presidency in 1900, he was only 41 years old. However, he had caught the public's attention with the popular version of his life story. Few candidates for the presidency or vice presidency have enjoyed the elevated level of admiration accorded Roosevelt in the waning days of the 19th century.

Biographers have chronicled every significant period of Roosevelt's life with one exception, and American Cyclone fills that gap. His nomination for the vice presidency was Roosevelt's debut as a candidate for national office. American Cyclone presents the story of his campaign, a whirlwind effort highlighted by an astounding whistle-stop tour of 480 communities across 23 states. Eighteen of those states gave a plurality of votes to the McKinley-Roosevelt ticket, a gain of five states for the Republicans over 1896.

Everywhere Roosevelt went, admiring throngs and dramatic events helped forge him into the man who would soon be the 26th president of the United States. Returning from the war, Roosevelt was familiar to millions of people across the country as a determined leader. As he interacted with crowds of hundreds, thousands, and even tens of thousands, Roosevelt felt their eagerness to see and hear him. Accordingly, for the first time, this whistle-stop campaign marks the development of the confidence and maturity that would transform Roosevelt into a national leader.

What listeners say about American Cyclone: Theodore Roosevelt and His 1900 Whistle-Stop Campaign