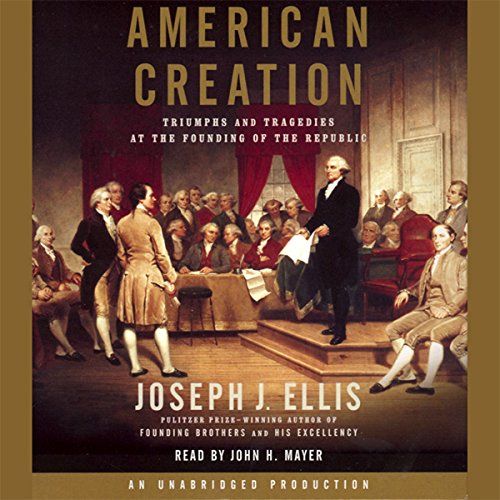 From the first shots fired at Lexington to the signing of the Declaration of Independence to the negotiations for the Louisiana Purchase, Joseph J. Ellis guides us through the decisive issues of the nation's founding and illuminates the emerging philosophies, shifting alliances, and personal and political foibles of our now iconic leaders: Washington, Jefferson, Madison, Hamilton, and Adams. He casts an incisive eye on the founders' achievements, arguing that the American Revolution was, paradoxically, an evolution, and that part of what made it so extraordinary was the gradual pace at which it occurred. He explains how the idea of a strong federal government was eventually embraced by the American people and details the emergence of the two-party system, which stands as the founders' most enduring legacy.

Ellis is equally incisive about their failures, and he makes clear how their inability to abolish slavery and to reach a just settlement with the Native Americans has played an equally important role in shaping our national character. With eloquence and insight, Ellis strips the mythic veneer of the revolutionary generation to reveal men both human and inspired, possessed of both brilliance and blindness. American Creation is an audiobook that delineates an era of flawed greatness, at a time when understanding our origins is more important than ever.

What listeners say about American Creation

Good But Not Quite There

As one who is thoroughly fed up with our current political paralysis and small-minded partisanship, I have often wished our politicos shared a common passion for greatness as did the revolutionary generation. This book certainly dispels that notion.

In Founding Brothers Ellis focused on their deep bonds. In American Creation he looks through the opposite lens, describing their competitions and jealousies. In the process he reveals history and stories that will be new to many.

The revolutionaries are commonly faulted for not addressing the two biggest issues which even they recognized would surely put a blot on their legacy and the nation. Most agreed on the need to end slavery and develop a fair accommodation with the American Indian. Despite their agreement on the moral imperatives, however, they failed to avoid sacrificing them to pragmatic decisions as they went about creating the new nation state. This was a failure and in both instances led to exactly where they predicted, civil war and contentious expansion across the continent. Having said all that, it is hard to see how they could have solved the rubric successfully.

Ellis does a good job of giving us the back stories as to why that is the case. From Jefferson’s wager that Napoleon’s plan to occupy New Orleans would never come to fruition, to his and Washington’s belief that demography would in time accomplish what the fledgling nation could not in securing its future through expansion. The book is rich in these stories, bringing to light seldom heard of characters. The courting of Creek Nation chief McGillivray who (almost) always put the security of his nation first; how a slave leader prophesied the defeat of Napoleon’s army when it tried to subdue French slave colonies in the Caribbean, thus thwarting the plan to occupy New Orleans and leading to the Louisiana Purchase; the designs and strategies of France and Spain to leave America with a sliver of the east coast as they contested for the continent and its promise, and a host of other stories.

The stories the author highlights, including the Federalist / Republican divide, the irony of Jefferson's grand exercise of executive power in executing the Louisiana Purchase, and the tension between what the founders believed to be right and the compromises they made are instructive and illustrative of today's quandary. Nothing much has changed, so it seems, other than the time and issue of the moment. Politics is still politics, as they say.

As far as history telling goes this is a good read, but it does not equal Founding Brothers. In that volume Ellis simply told the story, in American Creation there is an undertone of opinion and aloofness that does not serve well. But, it will be an enjoyable journey for the casual fan of history who wants to refresh his or her appreciation for the beginnings of the American story.

Mayer's reading is solid and smooth, if a bit understated at times. It's the history of our national founding, man! Wake up! My way of saying I found it a bit too smooth and understated. But hey, I like a bit more adrenaline in my morning coffee as well.

With Founding Brothers Ellis gave us a fascinating overview of the early years of the American Republic by focusing on several episodes that were key in the founding years. In American Creation he returns to this format to tell six more interesting episodes in the founding of the United States. This time he goes back to the Revolution to begin the book. The first chapter covers the year 1776 and the writing of the Declaration of Independence. The second chapter jumps forward a year and looks at the American army at winter quarters in Valley Forge. Here in Valley Forge the leaders of the American Army came to an understanding of what it meant to be a unified force. This helps to explain why so many of those who worked to make a stronger national government were former officers in the army. In chapter three he examines the arguments surrounding the creation and ratification of the Constitution.

The first half of the book covers episodes that deal with the creation of the nation. The second half looks at three key episodes in the early years of the Republic. In chapter four Ellis examines the issue of how the Native Americans were treated in the early years of the Republic. We see how Washington and Knox sought to come up with some arrangement that could protect the natives and allow room for settlement. The futility of any agreement becomes apparent. There is simply no way to keep settlers out of Indian territory. The last two chapters focus largely on Jefferson. Chapter five discusses the formation of the first American political party by Jefferson and Madison. The last chapter examines the Louisiana Purchase and how Jefferson dealt with what he saw as Constitutional issues.

This book feels a little more random at times than Founding Brothers. Each episode does work towards the central theme of the creation of the American system. Ellis is a great writer and this book makes a great introduction to the subject and to the episodes. Read this along with Founding Brothers and you will have a great start towards understanding the formation of the United States of America.

This is a must read for an accurate perspective of America’s resilience to the predictability of human nature. Rather than view the current political culture as a degeneration from that of a politically united band of founding fathers, viewing our nation’s first post-Revolution decades through the lens of history confirms the necessary messiness of allowing constitutional ambiguity to define our political process. Men’s views and ambitions have always clashed, but the Union perseveres.

At last and objective assessment of our foundation

How did Washington really prevail against the British? Why was a "democracy" was never the objective of the founders. How Madison's model for a republic was greatly improved by the convention and a more stable and representative government created. The dilemmas the founders encountered over the Indian and slavery problems. How the Louisiana purchase affected solutions. And much more.


Some basic knowledge of the players and situation is necessary to fully appreciate this outstanding book.