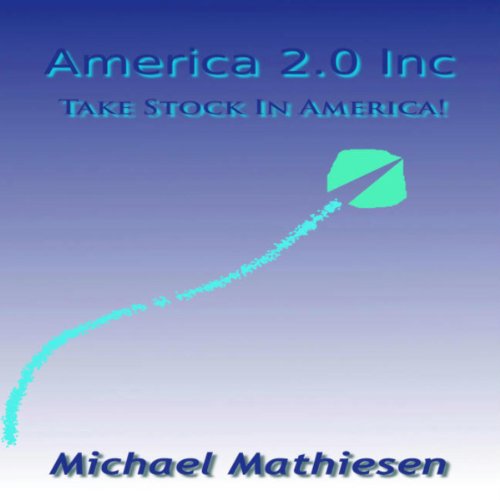 The old version of America is dead, bankrupt, kaput, finito, done, stick a fork in her. They killed her off with expensive wars and social programs without any means to pay for them other than printing money and through Government Bail-Outs of criminals who gave us the current financial collapse and depressed economy.

America 2.0 Inc. -- Take Stock In America allows us put a halt to this race to become a third world nation and then to stop this dangerous path to destruction by simply incorporating the entire US Government into a For-Profit Corporation.

Sounds crazy, I know. But, not after you read this astounding new book. When you finish it, you'll become convinced that this is the greatest idea you've ever heard about in your life.

First, we would no longer need to pay our citizens in the form of Welfare checks of any kind. No more unemployment insurance, no more food stamps, no more social security, Medicare or ObamaCare because we would all own part of the greatest economy in the world, the US Economy as stockholders. All of these so-called "Entitlements" are replaced by our own personal shares in America 2.0 Inc. As we all work harder to increase our shares, the economy improves under this newsocial contract, so does the over-all profitability and sustainability of the country.

From the profits generated by the sum of all our hard work, we are paid in the form of yearly dividends instead of paying taxes on our incomes to the boobs who simply throw our money down the drain.

Secondly, as a For-Profit corporation our executives would have to be far more trustworthy and obey all of the time-tested and trusted forms of corporate governance such as full disclosure, full accountability, shareholder protections, and due diligence.

Finally and perhaps most importantly, the investors, the shareholders in the American economy, you and me, would have total control over the decisions being made for us in the way of National Ballot Measures, a process wherein the shareholders would have the power to changer, alter or abolish any rules that the executives made in our behalf, thus being able to take corrective actions before any incompetent decisions were allowed to run their course.

If you are hungry for a clear path to a new version of America that is built upon the promise of both Capitalism and real democracy, this may be the book for you, unless you still think it's just a crazy idea.

What listeners say about America 2.0, Inc.