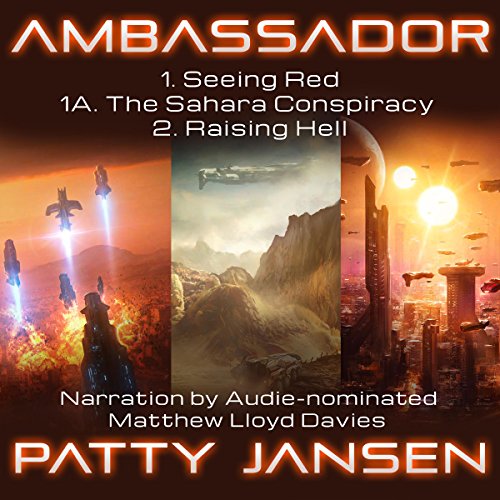 By: Patty Jansen
Narrated by: Matthew Lloyd Davies
Try for $0.00

The bundled edition of the first three books in the popular Ambassador series.

1: Seeing Red - Cory Wilson is about to start his new job as representative to gamra, the alien organization that controls the network for wormhole travel, when a political murder may well end his career before it starts. In Coldi society, you can get killed for looking a superior in the eye. Never mind accusing him of murder.

1A: The Sahara Conspiracy - Cory is asked to deal with the alien mafia on Earth, and stumbles across a plot that endangers Earth's fragile peace. You did not hear me say "nuke from orbit".

2: Raising Hell - The wormhole network goes down, and Cory's friend and leader of the largest populated world Asto is caught off-world. Dangerous politics are afoot on Asto, and Cory decides to help his friend. Yeah. Famous last words.

This series will appeal to readers who like alien societies that are familiar and disturbingly different at the same time, dangerous political intrigue, edge-of-seat action and characters who are never entirely good or entirely bad.

Once you start reading, you won't be able to stop. There are eight books in the series, with more on the way.

Why not try this one now?

"It is the sign of a great story teller when an intricate political landscape can be seamlessly woven into your brain without you ever noticing. I was well and truly hooked. The hierarchies and customs of various alien races are understandably complex but not too much to lose the reader. The story is fast-paced and twisting as Cory tries to unravel who could perpetrate the attack on the President and why they would do so, while enduring stonewalling and spying from all sides of politics, including his own." (Reviewer at SQ Magazine)

What listeners say about Ambassador: Seeing Red, The Sahara Conspiracy and Raising Hell

Wonderful. Absolutely one of the best Sci-Fi series.

I enjoyed this series. It is more complete than most sci-fi. Quite a bit more intelligent than most and it isn’t full of cliche characters or settings. Should be on anyone’s reading list!

loved it, great mixture of political intrigue and cultural diversity with plenty of action. the narrator did a great job, really good pace and emotion