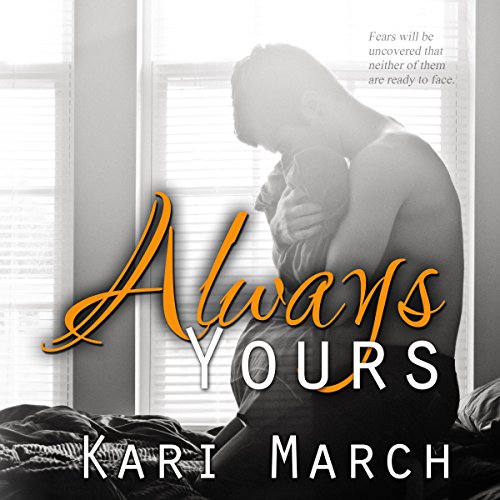 By: Kari March
Narrated by: Kai Kennicott,Wen Ross
Try for $0.00

That was the only word Cam Greer, the son of a wealthy media mogul, had ever associated with women. When he met Amber Murphy his senior year in high school, he felt like, for once, this girl loved him for him. When she pursued her dreams and left Cam behind, Amber not only crushed Cam's heart, she destroyed his future as well. He was left to start his life over, thinking the only woman that would ever truly love him was gone.

Cara Pratt has finally got her life on track. Ten years after watching her father literally walk out of her life, Cara has finally found happiness with a new stepfather and her high school boyfriend, Lance. Everything is going according to her plan, until a pregnancy test comes back positive. Once again, she finds herself watching the man she loves walk out of her life, taking her future along with him.

When Cam and Cara spot each other across the bar at Maggie's Place four years later, neither of them are interested in starting a relationship. They're both a little unsure and completely untrusting. They try to fight the intense immediate attraction, realizing right off, the seriousness of their chemistry, but as hard as they try, they can't.

As fate pulls them together, will their mistrust push them apart? As the smoldering embers from their pasts come blazing to the surface, fears are uncovered that neither of them are ready to face.

What listeners say about Always Yours

A Hot, Sensual, and Gut-wrenching Romance!!!!

What did you love best about Always Yours?

What didn't I love about this book? It had everything I looked for in a romance. Passionate love, hot sex, and heart breaking moments.

Have you listened to any of Kai Kennicott and Wen Ross ’s other performances before? How does this one compare?

I have listened to just about every performance Kai and Wen have done and each narration is better than the last. They are true storytellers and possess so much emotion you can't help but fall in love with the characters.

A tale of love, heartache, and second chances.

This was the first book I have read by Kari March, but it won't be the last. I loved the writing and the narration was amazing to say the least.

I know I say this often but I really do like the way they narrate their books. It can make a average book into a good listen. This was a good book.

I absolutely loved this book it had everything I could ask for in a romance from love,steamy sex,emotional pitfalls and oh so much more!! Such a great book and I am definitely going to recommend it to everyone I know!!!

If you could sum up Always Yours in three words, what would they be?

What other book might you compare Always Yours to and why?

What does Kai Kennicott and Wen Ross bring to the story that you wouldn’t experience if you just read the book?

Where does Always Yours rank among all the audiobooks you’ve listened to so far?

Its a good one.

What about Kai Kennicott and Wen Ross ’s performance did you like?

Everything. They do a great job of making the characters come to life.

I enjoyed reading Always Yours by Kari March. I enjoyed Cam and Cara's story although I wanted to scream at them both a few times. They were both damaged from past issues and past relationships. Although life seems to pull them apart, they will always love each other. This was a great read. I can't wait to read more by the author.

The heart wants what it wants

Would you consider the audio edition of Always Yours to be better than the print version?

Did not read the print version

I loved the "Oh no she didn't" moments. I could not believe some of the statements made.

What about Kai Kennicott and Wen Ross ’s performance did you like?

Kai and Wen play off of each other beautifully.

I lost precious sleep because of this book. And I'd do it again.

took forever for story to get moving, then way to much unnecessary drama. not to mention half the time they were with other people.

I would definitely recommend this book to friends, This was a very touching story about love meant to be.

Which character – as performed by Kai Kennicott and Wen Ross – was your favorite?

I loved both characters. Kai and Wen are such fantastic narrators that they make any story come alive.

I did not want to stop listening to this book!

Would you consider the audio edition of Always Yours to be better than the print version?

I have not read the print version but would love to when I have time and the audio was breathtaking.

What was one of the most memorable moments of Always Yours?

I just can't think of one or two the whole book was a roller coaster ride I loved everything about it.

Have you listened to any of Wen Ross and Kai Kennicott ’s other performances? How does this one compare?

I love everything Wen & Kai do they are fantastic and bring the story to life so well I have never listened and not enjoyed anything they have done they are one of the best.

When they had one last night and said goodbye OMG this had me in tears such a touching heart breaking part of the book.

This was such a great story but had me almost screaming at them to pull it together and not be so stubborn. I have listened to this book a couple of times and feel that it was just as good on the second listen. Wen and Kai do such a good job at acting the story out just fantastic.