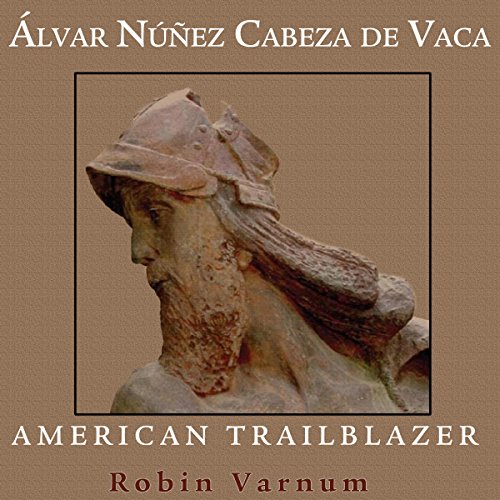 In November 1528, almost a century before the Pilgrims landed at Plymouth Rock, the remnants of a Spanish expedition reached the Gulf Coast of Texas. By July 1536, eight years later, Alvar Núñez Cabeza de Vaca (c. 1490 - 1559) and three other survivors had walked 2,500 miles from Texas, across northern Mexico, to Sonora and ultimately to Mexico City. Cabeza de Vaca's account of this astonishing journey is now recognized as one of the great travel stories of all time and a touchstone of New World literature. But his career did not begin and end with his North American ordeal. Robin Varnum's biography, the first single-volume, cradle-to-grave account of the explorer's life in 80 years, tells the rest of the story.

During Cabeza de Vaca's peregrinations through the American Southwest, he lived among and interacted with various Indian groups. When he and his non-Indian companions finally reconnected with Spaniards in northern Mexico, he was horrified to learn that his compatriots were enslaving Indians there. In Río de La Plata he tried to keep his men from robbing the Indians, enslaving them, or exploiting them sexually - policies that caused grumbling among the troops. When Cabeza de Vaca's men mutinied, he was sent back to Spain in chains to stand trial before the Royal Council of the Indies.

"Robin Varnum has written a masterful and highly readable account of Cabeza de Vaca's adventures in both North and South America." (Andrés Reséndez, author of A Land So Strange: The Epic Journey of Cabeza de Vaca)

Whereas most books about Cabeza de Vaca only focus on his extended Narvaez Expedition this book goes into detail about that for a little more than half the book then also talks about his expeditions in South America and time as governor there. So I would say this book is better than "Land So Strange" though both are great reads.

If you could sum up Alvar Nunez Cabeza de Vaca in three words, what would they be?

What other book might you compare Alvar Nunez Cabeza de Vaca to and why?

Undaunted Courage by Stephen E. Ambrose. Both Cabeza de Vava and Meriwether Lewis were early explorers of America and both had a tragic outcome. They both traveled a comparable distance and both men were men of honor. They were both the first men of European background to record and interact with native peoples and see many places in America.

What about Charles Henderson Norman’s performance did you like?

He did a good job.

My extreme reaction was in regard to the mutiny and the kangaroo court system. Greed was what ruled not justice.

This is a true to life Odysseus like adventure. One was able to see what life was like in the early to mid 1500's. It was brutal and full of greed. The book was educational and gave a picture of the pre-European way of life of the native Americans.

As one who grew up in the United States, and traveled abroad to Central and South America, it is amazing to hear this story. It really sheds light to many of the cultural, customs, traditions and present day issues surrounding North and South America. any chance I get to research history I appreciate and this book delve deep into a broad base of our history. I highly recommend anyone read this book and educate yourself to the Past.

Spain and the New World

Would you consider the audio edition of Alvar Nunez Cabeza de Vaca to be better than the print version?

Not sure-I only listened to the audio version.

The story and the characters were fantastic! I never realized that Spain's history in the New World was so fascinating; the narrator really brought all of the characters to life for me!

Have you listened to any of Charles Henderson Norman’s other performances before? How does this one compare?

I just really enjoyed the story-it was riveting. I feel like I have a more comprehensive understanding of the history that shaped humankind.

I had a tough time keeping track of the many names that were being read, especially since many of those names were unique to Spain.

Where does Alvar Nunez Cabeza de Vaca rank among all the audiobooks you’ve listened to so far?

From an historical perspective it's right up there. A very well written history detailing the life and time of the extraordinary Spanish explorer Alvar Nunez Cabeza de Vaca.

What was one of the most memorable moments of Alvar Nunez Cabeza de Vaca?

His interaction with the American natives.

Did Charles Henderson Norman do a good job differentiating all the characters? How?

Yes I have heard Charles read several books now, including the Bingim Young biography. He is very well suited to this type of factually rich book; he has an interesting reading style which helps keep the listener engaged.

Yes it was though that is almost never possible. Very interesting and well written account.

Wonderful biography on Alvar Nunez Cabeza de Vaca, which details his major acheivements and his life and time both before and after his great exploits as an explorer and chronicler in the American continent.

I received this book for free in return for an honest and fair review.

While this is not, technically an academic work of history, at least not in this incarnation, it is a very excellent popular history of events not often covered in most American history courses. We usually think of settlements in the New World in terms of the British, French and Dutch in North America, and although the Spanish settled in Florida and California (and other areas of the Southwest) we tend to think of them in terms, primarily of Central and South American exploration. However, this book is the story of an explorer who was the first European to see much of areas in the South and Southwest, and of his establishment of some settlements that predated Plymouth and even Jamestown. It is a story filled with adventure, hardships, and, ultimately diplomacy (between Spanish and Native Americans, between different groups of Native Americans, and ultimately between New World officials and the Monarchy of Spain. The author’s presentation is colorful and interesting, and despite the length and denseness of this book, it makes for fascinating reading, if the reader, as do I, enjoys history. In some respects this is a very dramatic tale, and some of the heroes are extremely unlikely, since they were, at heart, bureaucrats who would have been far more comfortable in a Provincial office, reading reports rather than wandering, (often with no idea where they were, or how to get to their intended destinations) around in often extremely hostile territory. The main hero, from whose documentation much of this story is taken, found himself lost in completely unexplored territory, having to survive against sometimes overwhelming odds, and having to both protect his men and develop at least working cordial relations with various groups of Native Americans, of whose language, history, customs and beliefs he was entirely ignorant. That he did so and found his way back to his own people after 9 years of wandering was a real feat ..and then, he had to fight for his life, his freedom and his reputation.

The writing is factual but colorful and accessible, and the narrator was professional, and completely comfortable with Spanish words and names, of which there were many. I, personally, found his reading speed a touch too fast, because this is a complex book, and can’t really be skimmed successfully.

This is the 3rd book I’ve read from University Audiobooks, and just as I enjoyed the first 2, I also enjoyed this. It is well written, well narrated, and obviously well researched, and I suspect, well documented, although the Audible book does not contain notes or bibliographies. Still, I give this book 4 out of 5 stars, and recommend it to anyone interested in history or sociology.

I received a free copy of this book in exchange for this unbiased review from AudioBookBlast dot com.

Who is Cabeza de Vaca?

Cabeza de Vaca is what it says it is! A readable account of Cabeza de Vaca's adventures in both North and South America! I am from Norway, and i never heard about Cabeza de Vaca to be honest. Robin Varnum has made me more interested in Cabeza de Vaca so i guess i am hocked. When that is said i think Alvar Nunez Cabeza de Vaca: American Trailblazer can be a bit monotone in how we are presented the material to be honest, then again i do recommend this!

12 hrs and 47 mins with Cabeza de Vaca is more fun with Charles Henderson Norman! He is a good narrator that gives a lot. His Voice is right, but what is it with his tempo that enoys me a bit? I am not sure, but it makes me take half a star away from perfect! So i do recommend this book if you want to know "Who is Cabeza de Vaca?"

Publish or perish at it's anthropological best

This thesis appears to be an extremely well-researched biograph delving into the experiences of this Spanish explorer of the Western Hemisphere in the early 1500's. There is detailing of his life in post-inquisition Spain, followed by detailing of his life among various indigenous peoples from Florida and Cuba to Central America to Texas and Mexico. He finds himself dependent upon them and learns many things about survival as well as their cultures. As this piece is very detailed, it is best absorbed in lecture-length spans. Fortunately, the narrator makes it all palatable with clear speech and a pleasant voice.

A bit too many dates

A great story, a true survivor. It takes a while to get hooked to this story