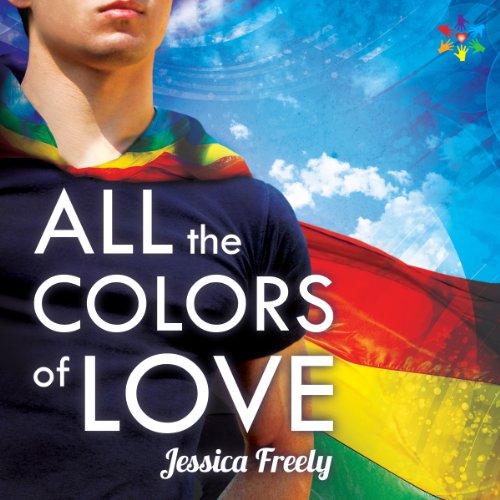 All the Colors of Love

By: Jessica Freely
Narrated by: Paul Morey
Try for $0.00

It sucks being the son of a super villain. At home, Harry spends half of his time getting medical treatments and the other half tied up in his father's underwater lair. It was different when his mother was alive, but she disappeared when Harry was six. He can't seem to stay out of trouble at school, and his new roommate, Antonin, thinks he’s a spaz, but somehow Harry has to find a way to stop his father's evil plans.

Antonin Karganilla wants to become a comic book artist, but other than that, being gay is the most normal thing about him. His uncle is an aquatic plant man, his aunt is a molecular biologist back from the dead, and his mom is an overprotective pain in the butt. Antonin's in boarding school and it's starting to look like he and this Harry kid might have a lot in common...and that means a whole new set of problems.

What listeners say about All the Colors of Love

Would you listen to All the Colors of Love again? Why?

What other book might you compare All the Colors of Love to and why?

Us Three and The Red Sheet by Mia Kerick. All three are really good Gay YA stories, and those are hard to find.

His ability to change is tones, nuances and voice from one character to another. And when a specific character has various emotions.

If you could take any character from All the Colors of Love out to dinner, who would it be and why?

Antonin, I'd love to pick his brain.

The description of this story is a little bit misleading, or I missunderstood. I was expecting a darker type of Sky High (the high school for super hero's kids disney movie) with a gay twist. What I got instead was definitely dark in some places, but also an uplifting story about a young man trying to find his way in life, separate from his evil father, equating everything he feels to colors.

Harry's mom left when he was six years old, supposedly on a trip with his father, but she never returned. His life from that day on was the content of nightmares. He had already been a medical gunie pig of sorts, enduring 'life saving' injections and now abuse across the board; physical, mental and verbal, all at the hands of his father. Harry bounces from school to school as he lashes out at everyone and everything that isn't his father, wishing that it were, resulting in nothing but trouble. He's just been dumped off at his latest school with the threat of being locked under the sink for the rest of his natural life if he steps so much as one toe out of line.

Antonin is a model student, graphic artist and openly gay. And now he is Harry's new rommate. Antonin comes from a loving, overprotective and sligtly psychotic family. He's very talented with his comic book with the writing and the art, he's also very inquistive by nature. Harry see's him as nosey and dorkish at the start, but when Antonin steps up to some bully's in defense of Harry, the two become friends. Antonin accepts Harry as his friend and trusts him to spite his shady past, the two grow closer with each passing day. Harry seriously fights the attraction, but not for the reasons one would think. He see's being gay as wrong but he is in no way hateful or hurtful to Antonin because of his sexuality. He just doesn't understand how he himself could be bad at one more thing, his father has his psyche so twisted by this point.

Harry accompanies Antonin home for the Christmas break even knowing that his father agreeing to him going will come at a price, a price Harry isn't sure he can pay. He tries very hard not to grow attached to Antonin, to develop feelings he know's will be returned. It scares him, to be loved unconditionally, it's not something he comprehends. As Harry and Antonin navagate their way through family dramas, love, loss, betrayal and more abuse; Harry learns that love is a valid emotion, one that comes in many colors.

This really was an amazing story that defined the grey area between 'children learn what they live' and 'we are our own destiny'. Harry's father is a cruel bastard who doesn't care about anyone but himself. Antonin's mother is overprotective and overbearing to a fault, which cause some of the same personality conflicts between them that we see between Harry and his father. The two of them could become very dangerous people given the circumstances of their lives until now. But together, they can become something wonderful, something more.
Narrated by the best, Paul Morey, I don't think there is anyone better at voicing those subtle nuances and changes in tones when going from one character and/or emotion to another as well as Morey.

There is one scene in the story that skirts the boundaries of YA and NA, it is passionate but appropriate. It's all about a love and awareness between Harry and Antonin. The simulated rape scene is more graphic in nature to be honest, but nothing ever goes quite over the line of young adult and adult. As I said, there is a darkness to this story, but overall it's very engrossing with the slightly sci-fi aspect. I'd definitely recommend this audio book, it has a little bit of everything and progresses so smoothly, your day will fly by.

Where does All the Colors of Love rank among all the audiobooks you’ve listened to so far?

This is one of my favorite Audible books. I bought this title expecting to be disappointed. I wasn't, it was excellent.

I was a little worried about buying a gay story between 2 boys written by a female (I know, I know, that's sexist, but let's face it... Men and women don't think alike) Not only was it about 2 gay boys, it was also kind of a "super hero" story, so I wasn't expecting much. I am so glad I bought this book. The writing was great, the story was fun and there were even a few surprises. It was one of those books that made me want to keep going back for more.

What made the experience of listening to All the Colors of Love the most enjoyable?

I was happy that it was not a super hero book. When I read the title and saw the cover photo I thought "Oh gosh, this should be odd" . I was very incorrect. This book is wonderful and keeps you interested throughout.

My favorite character has to be Sid. She is a wonderful persona of a mother figure, loving friend and a beautiful lover. She makes the story more peaceful when her POV (Point Of View) is in contrast. Great character Jessica Freely.

What does Paul Morey bring to the story that you wouldn’t experience if you just read the book?

I completely enjoyed the contrast that Morey gave to each character to individualize them. I say great job in all to bringing the characters to life.

If you could rename All the Colors of Love, what would you call it?

I personally think the title is perfect.You have to read to thoroughly in order to enjoy the title. I am sure most would agree.

This is a very good read. Not what you would think from the title and description, there is action, love, and sorrow all in one. Everything you would look for in a good book. I highly recommend this book to buy.

The ending was the best part. But the worst was the self indulgent writing.

Would you be willing to try another book from Jessica Freely? Why or why not?

Did Paul Morey do a good job differentiating all the characters? How?

Not really. But I don't know if it was his fault or the writing

YA version of The Watchman graphic novel

The best way I can describe this book is a young adult version of The Watchman. If you haven't read The Watchman or seen the movie, it is a very dark version of the Superfriends interlaced with modern society. This is not as dark, but a watered down version with teenagers and their weird love ones battling the evil that is one of the MCs father. They talk about murder, child slavery and rape very casually because in this alternative universe, that is normalish. There are lines like "she went to pick up the rocket launcher when she gets the Christmas presents." It is kinda disturbing, but well done and overall enjoyable. There is a romance between the two young people and two female characters. The narrator does a good job and overall definitely worth a credit.