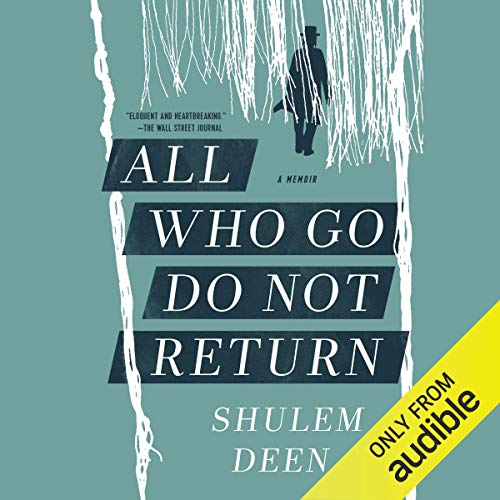 All Who Go Do Not Return

A moving and revealing exploration of Hasidic life and one man's struggles with faith, family, and community.

Shulem Deen was raised to believe that questions are dangerous. As a member of the Skverers, one of the most insular Hasidic sects in the US, he knows little about the outside world - only that it is to be shunned. His marriage at 18 is arranged, and several children soon follow.

Deen's first transgression - turning on the radio - is small, but his curiosity leads him to the library and, later, the Internet. Soon he begins a feverish inquiry into the tenets of his religious beliefs until, several years later, his faith unravels entirely. Now a heretic, he fears being discovered and ostracized from the only world he knows. His relationship with his family at stake, he is forced into a life of deception and begins a long struggle to hold on to those he loves most: his five children.

In All Who Go Do Not Return, Deen bravely traces his harrowing loss of faith while offering an illuminating look at a highly secretive world.

What listeners say about All Who Go Do Not Return

An eloquent and fascinating look into a secretive world

Shulum Deen is a very gifted writer and his reading was both powerful and pleasant. He was telling a story, not reciting a text. Ironically, it was probably the upbringing that he escaped that allowed him to craft such a beautiful story as he comes from a culture with a strong textual and oral tradition. His story is much more of a Bildungsroman (personal growth tale) than a juicy tell-all. I highly recommend this book.

I'd quibble with the Publisher's Summary on the Audible page, because I didn't come away from the book feeling like Shulem was "raised to believe that questions are dangerous."
It sounded/read to me that he chose, for very personal reasons, in his teen and early adult years, to join a community that believed that questions are dangerous. And that this was the community he was married and had a family in.

The trajectory of his loss of belief is a very tragically beautiful read, as he desperately looks for answers to the questions that his community doesn't want him to ask. He seems to have specific answers in mind that he needs to hear, and when he doesn't get the answers he wants, he takes it very hard.

The tragedy is in the community's response, and what happened with his exwife and his children in response to his personal evolution. The beauty is in his birth family's (his mother's and his siblings') unconditional love and acceptance, as they remain believers (notably not in the same community that he chose to live in).

I always wanted to know about those people with the ringlets in their hair and why the women wore wigs when they had perfectly good hair underneath. I can't believe how isolated their lives are from modern society and how narrow their life experiences. It takes a lot of courage to walk away from the only life you know and enter a new world knowing you do so alone. I found it very sad that Shulem had to loose contact with his kids and cut off from all he knew.

The book is worth the read. It is not riveting but it is a story that is well worth telling. And the book is very personal; you feel like you know Shulem. I wish Shulem much love and a rich life. For sure he has taken a very brave path.

Shulem’s escape from this Cult is quite emotional- he has lost his children- but gained his freedom-
It is very remarkable that in the USA a place like New Square even exists. This sect of Jews have no connection with the world around them- they live as though they are still in the “shtetls” of Eastern Europe from the early 1900s- “ala Fiddler on the Roof”- even Tevye was more aware of the outside world-they HATE everyone but their “own kind”- is this what their Lord intended???

I thought the story was fantastic. I find all the details of Hasidic life so interesting and Mr. Deen's story is fascinating. I couldn't stop listening. The way he described his life and feelings so vividly with such detail, made it such a pleasure to listen to. The performance was excellent as well.

Bravo! I couldn't (in the audio sense) put it down, and hope for a sequel. I recommend this eye-opening, poignant, heartfelt, honest memoir wholeheartedly.

The book was riveting. The author speaks poignantly and honestly. He never overdramatizes. His recollections of earlier times add to the story and don't distract from it. He takes responsibility for his actions and shows how one decision can have drastic effects. I would love to get to know him better and look forward to, reading more of his writing

I was engaged and interested from start to finish. The author tells his story in a balanced and well thought out manner. He is such a good story teller; objective (as humanly possible) and poetic.
The author narrates the book which was a bonus in this case.
I highly recommend!

I rarely write reviews but this one I must recommend. Shulem’s story is rich in emotion and colour, and it will hold you long after it’s over. Clearly Shulem was meant to be a writer and I’m glad that’s what he does now.
I look forward to more from him.

The Imperfect Finding of Yourself in the Tech Age

Achingly true, beautifully written biography of the poignant tensions of a modern man looking for individuation, intellectual freedom, and his place in community. Although the setting is Hasidic-Judaism, those of any background who have sought independence or authentic satisfaction can readily relate. The author’s experiences have breadth; this book can be used for reading groups. We all are at risk for community disruption, isolation, shame, second-guessing, ostracism, parental alienation, divorce angst, and intolerable emotions. Behaviors or cultural designs that may have been adaptive in the past can be impossibly slow to change. The spiteful ones who perpetuate control in those designs seem desperate more than wise, cruel more than nurturing, anxiety-driven more than optimistic, and habitual more than logical. At the same time, I do think a few of the heart-centered details of the author’s experience were unnecessary and were likely inflammatory for his relationships; sometimes we defend ourselves with the wrong words when people do not understand us or do not speak the love languages we need. The author’s total losses hurt all involved; to ostracize and shame someone does not improve those who do the ousting or the shaming. Bigger societal issues are unanswered and screaming; how do we build healthy micro-communities within this technologically driven society? How can we build identities that are authentic but not homogenized? The scrupulosity of extreme faith satisfies some, but, to the author, the heretics move and shake the universe.

From someone who has no detailed knowledge of Jewdaism, but with an interest in it's more stricter form, I found this an excellent read. Whilst it was sad to hear the struggle, it was very thought provoking and left me feeling more informed but with extreme sympathy for Shulem.

a memorable glimpse into Hasidic life

A fascinating insight into a culture/religion I know so little about. This man's journey from an insular community into mainstream society is heartbreaking. I couldn't stop listening to it. I would love an update on how his life and family relationships have changed since the publication of this book. Will we get a sequel? I hope so.

Also, the authors accent was a bonus I never knew I needed.

This is such an interesting and heartfelt book. It really lifted the veil on a community that I knew very little about. The fact that it is Author-narrated lends credence to the storytelling.

I am grateful to Shulem Deen for writing this book, for choosing to describe the experiences that led him to have to leave a community that, while full of love and faith, would not allow him full autonomy in love or faith or the seeking of knowledge and personal fulfilment. As someone who left a more permissive community and lost my faith for similar reasons to Shulem, and has only recently regained it in a more free form, I am immensely grateful to him for writing everything he wrote. This book made me feel less alone. I hope it helps people of faith and without faith understand the experience of losing faith and losing community, so that we can build better communities in future.