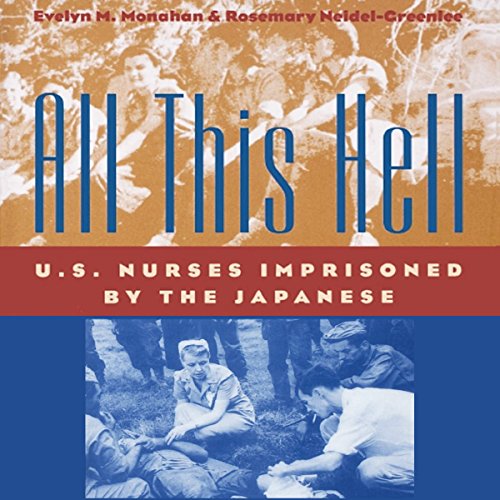 More than 100 US Army and Navy nurses were stationed in Guam and the Philippines at the beginning of World War II. After the Japanese attack on Pearl Harbor in December 1941, five navy nurses on Guam became the first American military women of World War II to be taken prisoner by the Japanese. More than 70 army nurses survived five months of combat conditions in the jungles of Bataan and Corregidor before being captured, only to endure more than three years in prison camps. When freedom came, the US military ordered the nurses to sign agreements with the government not to discuss their horrific experiences. Evelyn Monahan and Rosemary Neidel-Greenlee have conducted numerous interviews with survivors and scoured archives for letters, diaries, and journals to uncover the heroism and sacrifices of these brave women.

What listeners say about All This Hell

As a nurse myself I thought this book would be interesting. Like a lot of people I never knew that we had women/nurses in POW camps in WW2. The courage these women possessed and fortitude is amazing. I really enjoyed this book and would recommend it to anyone intetested in history. These nurses should be commended and everyone should know their bravery. The narrarator just brought the whole thing together and made the women real. life was breathed into the women in the book.

A humbling description of the lives of American POW nurses

The book brought out a series of emotions from start to finish. From grief to fear and finally excitement for their liberation. There is not a moment where the raw emotion is not palpable. At times the story jumps forward and back in time which I made it a bit hard to keep up, however by the end all gaps are filled, leaving the listener satisfied. I would recommend this book to anyone who has yet to hear the story of these women who served tirelessly for their country in the face of death.

Excellence in every way

I’ve been a nurse myself for nearly 12 years, and consider myself reasonably knowledgeable about history. Thank you to the author, for writing this book; I didn’t know how much I “didn’t know”. What a heart wrenching and ultimately redeeming story. The narration is perfect, neither over dramatized nor dry; never boring, but strong and clear. Highly recommend!