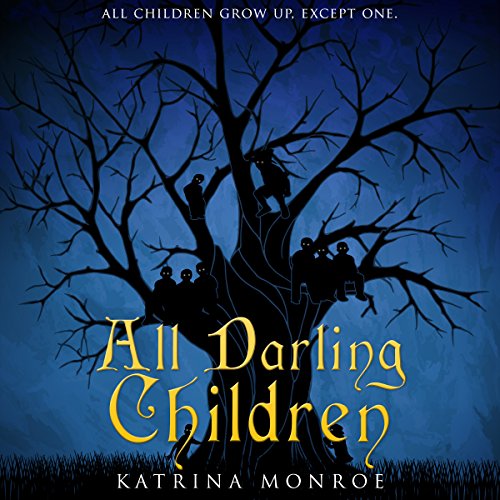 By: Katrina Monroe
Narrated by: Jane Oppenheimer
Try for $0.00

All boys grow up, except one.

On the 10th anniversary of her mother's death, 14-year-old Madge Darling's grandmother suffers a heart attack. With the overbearing Grandma Wendy in the hospital, Madge runs away to Chicago, intent on tracking down a woman she believes is actually her mother.

On her way to the Windy City, a boy named Peter Pan lures Madge to Neverland, a magical place where children can remain young forever.

What listeners say about All Darling Children

It's like a fan fiction crossover, between Lord of the flies and Peter pan. I think one of the biggest things that kept bothering me with this is the ages of Michael and therefore Wendy, her daughter and granddaughter. Michael states he is 80 making Wendy at least 88 I can't remember how old they were in the original it would make a lot more sense if Madge was a Great granddaughter. I can't say more about it without spoilers and I hate spoilers. But the way it stands the time line just doesn't make sense.
Reasons I enjoyed this audio book: Great world building, Unpredictable, original, Action-packed, Twisted, Haunting.
This Audiobook was given to me at my request from the publisher, author or narrator and I provided this unbiased voluntary review.

NeverLand as you would Never expect!!

What made the experience of listening to All Darling Children the most enjoyable?

Although I've picked up several books about Wendy's daughter, Jane, I had not read any to completion. I'm not sure if this picks up any information from those.
And that brings me to what I loved most. I loved how this spanned three generations. Wendy, Jane, and Madge only had their strong nature in common. But the similarities end there. Madge was an angry child who was emotionally stunted, a clear teen rebel who ached for love and acceptance. The original characters were brought back with grace and the backstory was brief yet thorough for all characters (except Michae's) .
The first 95% was captivating and very well written.
I don't feel the book ended with complete satisfaction. It felt loose ends were dangling. The epilogue didn't resolve the questions nor bring contentment, either.
Michael didn't make sense. He was the only character who was underdeveloped and shallow.
Who knows why he is called Uncle although he was Madge's grandmother's brother. Who knows why Peter wasn't enlightened of his relationship to Madge?
I don't think Jonathan's life span was clear either, come to think of it.

Neverland had changed since the original Peter Pan story and fit beautifully with events and the plot.

Jane was the perfect narrator for this book. She offered the voices for each character that complemented their age and mental status.

Ireview all ebooks and audiobooks. However, my disclaimer per Aubiobook Book:
"I was given this free review copy audiobook at my request and have voluntarily left this review."

Didn't we always feel that Pan held darkness? In this tale Wendy's granddaughter Madge finds out that he does. A dark retelling of Peter Pan . Enjoyable and a little bit creepy. It will change how you view the classic Peter Pan story. Good narration and good storyline.“I was voluntarily provided this free review copy audiobook by the author, narrator, or publisher.”

I enjoyed this new twist on a childhood story that we all know. It’s definitely kept you on your toes because you never know which way this was going to go


Or even seen in this story. Peter Pan is not quite the person we know or remember in the original story. Still has his list boys but are different than you think. Such an amazing story.