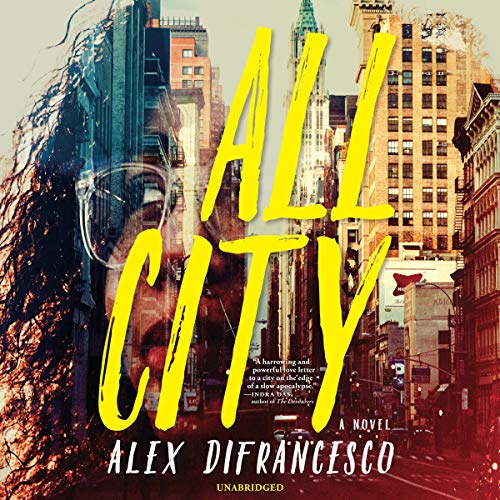 All City is more than a novel, it's a foreshadowing of a world to come.

In a near-future New York City ravaged by climate change and economic inequality, a superstorm hits, leaving behind only those who had nowhere else to go and no way to get out. Among those who remain are 24-year-old Makayla, who works in the city's most ubiquitous convenience store chain, and Jesse, an 18-year-old, genderqueer anarchist living in an abandoned IRT station in the Bronx. In the aftermath of the storm, Jesse joins Makayla's group of remainders in an abandoned luxury condo building, carving out a small sanctuary in the midst of a destroyed city.

Meanwhile, mysterious, colorful murals begin to appear throughout NYC, bringing hope to the forsaken and left-behind. But the storm's castaways aren't the only ones who find beauty in the art: the media, having long abandoned the supposedly hopeless metropolis, "discovers" the emergence of the murals. When one appears on Makayla and Jesse's repurposed luxury condo, it is only a matter of time before the landlord class comes back to claim the city for themselves.

What listeners say about All City

The audio performance was so excellent...

...that it elevated the book to "ok." The book started off so well but got progressively worse. The main character goes from being a likable, well-rounded and interesting character to...well, let's just say I wasn't a fan of Makayla at about the 60 percent mark. The rich girl (can't even remember her name) was so over the top it was ridiculous (but fantastic audio narrator!), and I wasn't that interested in Jesse. Those are the 3 main narrators. I would have liked the boyfriend's POV--he was a great character.

I liked the setting and the world building, but it really fell flat on the murals. The synopsis leads you to believe this will be a major part of the story (and it's one of the reasons I bought the audiobook), but it isn't.

I'm a pretty harsh critic and I'm sure others will rate this more highly. Despite my low rating, I'll listen to the author's next book because this was something different and creative.

Slow, immature and not believable. No imagination.Would never purchase this book. Could have done better.

It was enthralling to walk in the shoes of these characters during this disaster. As a cis gender white male i feel like I have briefly seen through new eyes. the complexity of the issues, the rage, the hope, the despair. very greatful for experiencing this nobel.

Performance pulled it off

Book makes you reflect on today’s day and age. I loved seeing the contrast between haves and have nots during a natural disaster; however, book started so good and made me hope for a crazy ride but unfortunately the story started dying so slowly that I couldn’t wait for it to end.

I love a story that makes you feel and this does that. It's very honest to the reality if the world Especially if the Trump era doesn't end soon. That being said, you won't find happy endings here. It's kind of like black mirror, but less sci-fi. its not your world, but your constantly aware of how easily it could be and that makes it kind of scary. Sometimes we need to get scared to act though.

I just couldn't get through the poor grammar. I know it's written as if a "real" narrative, but all it does is perpetuate poor speah and slang.

I found it exhausting and stressful listening to a story from a character’s perspective who clearly is small and has some coping skills, yet is negative and struggles (refuses?) to find anything worthwhile and positive about her challenging life. The frequent bitterness and resentment just was too toxic for me to continue listening to.

I really liked the book i loved having the different voices for each character and the characters are likeable.