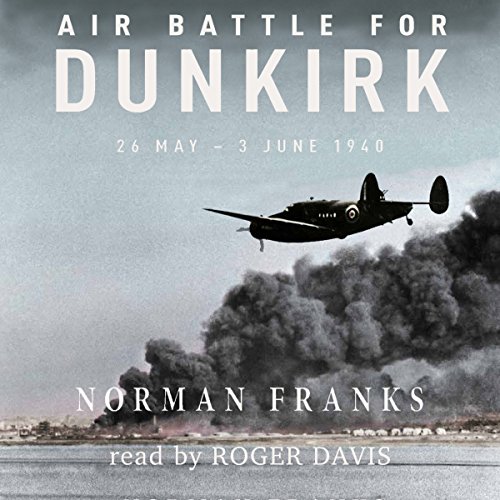 By: Norman Franks
Narrated by: Roger Davis
Free with a 30-day trial

With the epic blockbuster film Dunkirk, to be released in July, 2017, directed by Christopher Nolan and starring, amongst others, Kenneth Branagh, Tom Hardy, and Mark Rylance, this reissue has never been more timely. "Where is the RAF?" was the oft-quoted question asked by soldiers waiting on the beach at Dunkirk, to where they had retreated following the German blitzkrieg through northern France, and where they were now being pounded by the Luftwaffe. The air forces were there, as Norman Franks proves, detailing the outstanding achievements of the Allied pilots who fought, using outmoded tactics, against enemy pilots who had earlier had easy victories over the Polish, Dutch, and Belgian air forces. The RAF's achievement reminds us just how close Britain came to disaster in June, 1940.

What listeners say about Air Battle for Dunkirk

Informative but one sided and dull.

The aim of this book is to dismiss the myth that the RAF were not at Dunkirk. Unfortunately it does this by collating After Action Reports from Squadrons and individual RAF pilots and nothing else. This is a totally one sided history, probably researched at the National Archives and nowhere else. This account has no Luftwaffe information what so ever unless it is reported by the RAF, not a single mention of a single German Unit involved. There is very little context, either strategic or tactical and thus it reads like a list, which is what it is. It is called the Air Battle for Dunkirk when it should be called the RAF’s account of the Air Battle for Dunkirk. I am not inferring it is biased in anyway just that it only a single part of a complex story and is duller because of it. Had it been released in 1955 I could have understood this but it is a very recent piece of work. It is informative in so far as it goes but the list like nature of the narrative is wearing.