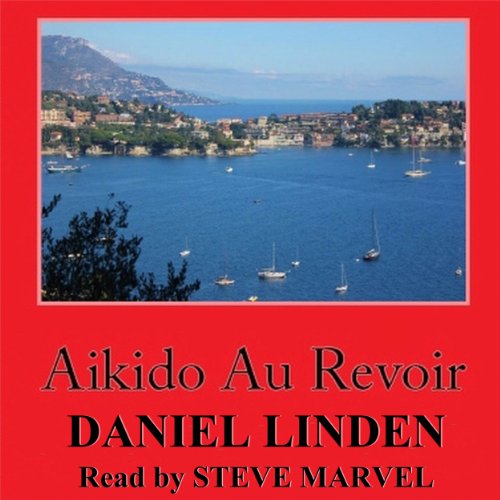 By: Daniel Linden
Narrated by: Steve Marvel
Try for $0.00

Aikido Au Revoir is the fifth novel of the Aikido Mystery Series with Sensei Parker. He is in France on the Cote d'Azur teaching a pair of aikido seminars. It's tough work, but someone has to do it, right? Why not Parker? He is a master of the art, after all, and although he has his own school back in Orlando, Florida, it isn't doing as well as it was before the economy tanked.

He is taking a break from his day job with this trip to France. He has had to resort to being a Private Detective to make ends meet, and this is going to be a vacation as well as a teaching job. Or is it? Of course not! He's Parker, and where he goes, trouble always follows.

First he meets up with some old friends in Cannes and then he's dragged into a mystery, looking for a stolen kakemono from the dojo where he is teaching. Why would someone steal a little scroll with "aikido" written on it? It doesn't make sense.

Parker does his best, but he doesn't speak French and has to rely on the goodwill of several new friends as he goes about the troublesome business of finding the missing scroll. Parker battles with mysterious thugs covered in tattoos, angry French women, beautiful French women, seductive French women, who all try to get in Parker's way as he uncovers a crime that goes back decades and uncovers a precious secret worth hundreds of millions.

This is the best Parker Mystery yet.

Where does Aikido Au Revoir rank among all the audiobooks you’ve listened to so far?

I like this narrator alot - that makes a big difference in the overall enjoyment. The story has some weaknesses, but I enjoyed it very much. Maybe top ten.

Make the women less petty. Parker always seems to be the magnanimous guy - keeping in touch with these beautiful women that he falls for, who let him down. They never have the ability to see the bigger picture, and always end up being shallow.

Which character – as performed by Steve Marvel – was your favorite?

He does the central character, Parker, really well - just spot on. And he can do female characters without sounding silly or distracting. He does accents well - not just the accent, but the attitude. Great!

Sensei in the south of France

Tell Daniel to stick to the mystery - write a separate book if he wants to expand on the Aikido philosophy - I liked a little of it, but not when it means dropping the thread of the story. And write a woman a cool as Parker! Even if they don't work out, it doesn't have to be bcse she's flawed, shallow, or bi-polar!