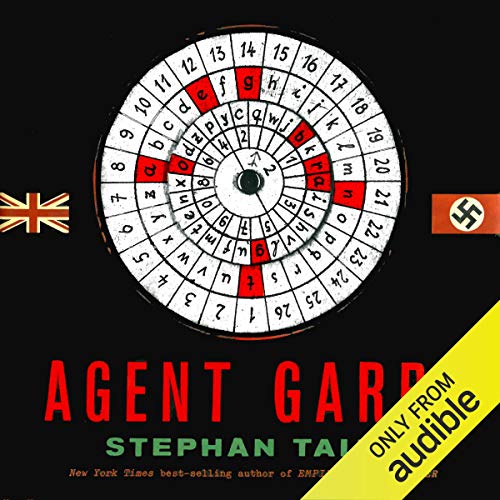 By: Stephan Talty
Narrated by: Clinton Wade
Try for $0.00

Before he remade himself as the master spy known as Garbo, Juan Pujol was nothing more than a Barcelona poultry farmer. But as Garbo, he turned in a masterpiece of deception that changed the course of World War II. Posing as the Nazis’ only reliable spy inside England, he created an imaginary million-man army, invented armadas out of thin air, and brought a vast network of fictional subagents to life. The scheme culminated on June 6, 1944, when Garbo convinced the Germans that the Allied forces approaching Normandy were just a feint - the real invasion would come at Calais. Because of his brilliant trickery, the Allies were able to land with much less opposition and eventually push on to Berlin.

As incredible as it sounds, everything in Agent Garbo is true, based on years of archival research and interviews with Pujol’s family. This pulse-pounding thriller set in the shadow world of espionage and deception reveals the shocking reality of spycraft that occurs just below the surface of history.

"The book presses ever forward down a path of historical marvels and astonishing facts. The effect is like a master class that’s accessible to anyone, and Agent Garbo often reads as though it were written in a single, perfect draft." ( The Atlantic)
"Stephan Talty’s unsurpassed research brings forth one of the war’s greatest agents in a must-read book for those who think they know all the great World War II stories." (Gregory Freeman, author of The Forgotten 500)

What listeners say about Agent Garbo

The main, real life character (a failed chicken farmer who becomes the most important spy in WWII) is too fantastic not to be true and fascinating to follow (kind of like the one-eyed neurologist with Asperger's in the Big Short).

That said, the writing was too melodramatic. Lots of details/flourishes about scenes were added and seemed somehow artificial or at least unnecessary. The story line is fantastic, these descriptive trimmings weren't necessary

Despite my concerns, it's a good read and well worth reading.

Awful narration - I am getting the book instead

I. was really looking forward to this audiobook. Sometime last year the WSJ Weekend edition had an article on the relatively unknown spies of WW II and "Agent Garbo" seemed fascinating. But I had a headache after 30 minutes of listening. I have never heard a narrator who reads so fast yet manages a monotone so all the words run together at breakneck speed to create a mash of sounds that bury the story. Please reissue this audiobook with a narrator who appreciates his subject.

loved the book. The narrator is kinda lame but the story is absolutely fascinating

The Garbo story was unknown to me until I watched a movie about another spy during the Egypt-Israeli conflict of the 70’s.
Having lost my dad 2 years ago who was a Normandy vet and having traveled to the beaches of Normandy, this true account of the spy Garbo is more than intriguing to me.
You do not have to be a war history enthusiast or a veteran of war to appreciate this remarkable spy who’s contribution to WW2 and especially D-Day is unmatched.
The author’s writing is a fine balance of detail of the spy world and personal challenge of Garbo’s life. The narrator’s performance was such that I was captured by the story.
So can’t recommend enough that you make this your next book.

Truly fascinating story. Opens your eyes to all that it took for the allies to win the war. Well researched and performed.

Moving and incredibly interesting.
A huge reminder of all the sacrifices so many made for our freedom.
An extraordinary example of how one man of modest means can make a difference to so many people.

A must listen for WW II readers

I have the book, I have the DVD now I finished the audio book version. Simply said one of the very best story’s of WW II.

Story, performance flows like an Ian Fleming novel with plenty of suspense, plot twists, mistakes, etc. Yet, all real with historical impact.

Would you listen to Agent Garbo again? Why?

Yes. It's so over the top that you it's like something out of Hollywood but it's completely real. It makes you believe that extraordinary selflessness still exists.

Garbo because he's larger than life and yet is someone you would walk by on the street and never notice hi,.

Get Garbo: The Greatest Spy

Firstly ignored by British intelligence this unbelievable man weaved a web of intrigue so powerful Hitler himself positioned his military on D-Day on the deception spun by Garbo & others. Saving thousands of lives.

The areas of the world he assisted during WW2 owe him a deep debt of gratitude for his help in winning the war. He amazingly created a fantasy network of spies in England and Spain that defies the imagination of the common person and became a double agent fooling the German high command into believing they really were receiving the most secret information on the Allied Command's movements and plans, when it was all pure fabrication. Hitler even awarded him the Iron Cross.

It is a fast read that pulls you back to it time and again until you get to the end. This is a true story and the action and intrigue will keep you glued to this book.

I would also highly recommend Agent Zig Zag, which I feel is an even better book.