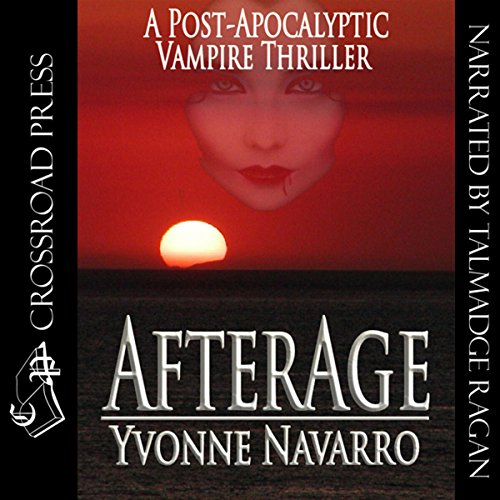 By: Yvonne Navarro
Narrated by: Talmadge Ragan
Try for $0.00

A plague of vampirism has crept across the country, reducing once-thriving cities to ghost towns. In Chicago, a few scattered survivors hide behind the fortified walls of office buildings and museums, raiding deserted stores for dwindling supplies of clothing and food.

Meanwhile a hungry vampire population also struggles for survival as their prey grows scarce, forcing them to capture alive the last remaining humans as breeding stock for the blood farms that will ensure their future.

Now a small band of humans makes a desperate last stand against their vampire masters, fighting back with the only weapon that can kill the dead.

What listeners say about Afterage

We are presented with an apocalyptic, paranormal, mystery tale of good versus evil. Vampires exist in the city of Chicago along with a handful of survivors. The apocalypse, created by the vampires, has apparently covered the world. A neat feat indeed, must be a heck of a lot of vampires. The vampire’s role is strictly survival, concerned with the declining availability of vampiric food. They should have curbed their initial appetite. They have some interesting ideas on how to deal with the issue. The survivors not only have to cope with the typical apocalypse hardships but must avoid the nightly stalking of the vampires as well. They too are working on a little surprise. A not-so-subtle hint of heavenly assistance for the survivors occurs throughout the tale. I think that might have been omitted but what the heck. It sort of goes along with the quotes from Revelation as chapter headings. No religious proselytizing is included. I think it establishes the good versus evil theme. I like the main characters, they’re fairly realistic, displaying strength and some common sense. There’s a brief romance as well. It’s kind of expected when you’re possibly the last people on earth. All-in-all it’s an easy recommendation for paranormal fans.

Well written post apocalyptic story taking place in a familiar setting. I'd just returned from a trip to Chicago when I read this and the picture in my mind's eye matched my memory.