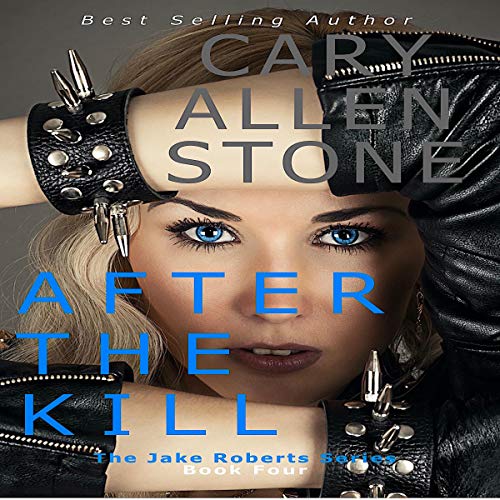 Will Jake pull the trigger? A gunman enters Sky Harbor Airport. His van, parked next to the terminal, has enough explosives to bring down Terminal 4. Jake Roberts says goodbye to Caitland. Alerts are broadcast to evacuate the airport. Jake assist Phoenix Police. His best friend, an airline pilot, has been shot twice. Will he be able to rescue him?

Forensic psychologist Mackenzy Graham specializes in serial killers. On a research grant, she travels to Broadmoor Psychiatric Hospital in England where the most sinister killers are patients. She has a surprise for the most dangerous patient. When she returns to San Francisco she applies what she learned.

In Malibu, Caitland hosts a party for her A-list clients. After the party, Caitland is alone in the house, except for an intruder waiting in the dark - the “West Koast Killer”. Jake asks for the help of a gang leader to help him turn the tables on the killer. They drive into the desert late at night.

What listeners say about After the Kill

Jake Roberts is a former homicide detective on vacation with the love of his life. When his friend, Fred, is shot by an active shooter, drawing Jake into action. While he’s distracted, his love is drawn away by a new threat. One who is determined to make Jake his next victim.

Even though this is my first book in this series, I found the writing to be fresh and easy to read. There’s plenty of suspense and drama, but the way it’s written makes it all the more engaging. I found the main characters, Jake in particular, to be easy to relate to, and in turn, easy to cheer on.

Narration by the author gave each character the perfect emotion to make the story more three dimensional and engaging.

What's a dog without a master?

Former homicide detective turned crime writer, Jake Roberts, is in Phoenix with his true love, Caitlin, for a relaxing holiday visiting lifelong friend, Fred, and his wife. But Fred, a pilot, is shot in the knee and chest at the ajrport by a desperate army vet. turned terrorist and suicide bomber which draws Jake back into danger as he goes to the rescue. With Fred hospitalised, Caitlan returns alone to host the big Hollywood party which had been arranged at Jake's home, promising to come back to Phoenix the next day, little knowing that there is a serial killer at large intent on making Jake the next victim.

After the kill, by author Cary Allen Stone, follows on directly from the previous novel, After the Goode although it is not necessary to have read that book to enjoy this one. The protagonists are nicely characterized and narration, by the author, further conveys the feel of the story. His voice, a little less than smooth, carries the emotional input well and is easy to hear. There are a few minor production glitches but is otherwise good. (And a small mystery from the previous book is solved as section three in this story had obviously been accidentally included in that book also. The introduction of the two psychologists at section three in After the Goode, never to be heard of again, had seemed very srrange).

This is a series which is fairly new to me. The writing is natural, fresh and focused very much on the people, not just the story. This makes for a fulfilling reading. All the emotions are there - love, joy, humour, frienship, fear, pity, sorrow, guilt, hate and anger, and any others I might have forgotten. This is an excellent series and the protagonists are rapidly becoming, if not friends, then at least aquaintances I look forward to meeting again.
My thanks to the rights holder of After the Kill, who, at my request, freely gifted me with a complimentary copy via Audiobook Boom.