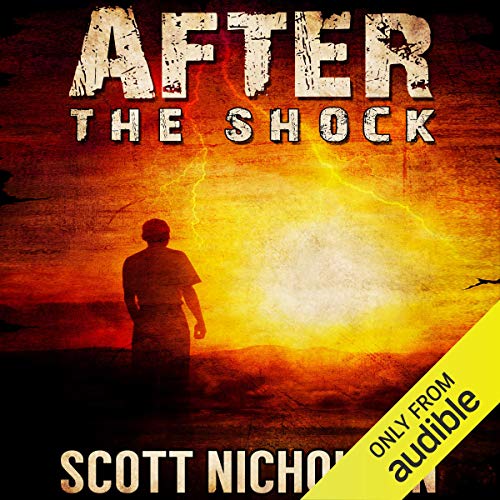 A massive solar storm erases the world's technological infrastructure and kills billions. While the remaining humans are struggling to adapt and survive, they notice that some among them have...changed. Rachel Wheeler finds herself alone in the city where violent survivors, known as zapheads, roam the streets, killing and destroying. Her only hope is to reach the mountains where her grandfather, a legendary survivalist, established a compound in preparation for doomsday.

Other survivors are fleeing the city, but zapheads aren't the only danger. Rogue bands of military soldiers want to impose their own order in the crumbling ruins of civilization. When Rachel discovers a 10-year-old boy, she vows to care for him even at the risk of her own life. And the zapheads are evolving, developing communal skills even as they lay waste to the society they will eventually replace.

What listeners say about After

A different kind of "zombie" story

In spite of my love of apocalyptic stories, I'm not a fan of zombies. I have never read a zombie book with a good explanation for the actions and behaviors of said zombies (e.g. eating people), and that bugs me when I'm reading. "After" does what no other zombie book has. Okay, so they aren't real zombies in the traditional sense. No actual eating people. However, an explanation for both the change itself AND for the behaviors of the changed people afterwards had me cheering.

The story followed 3 primary groups of people as they escape from the changed people. Towards the end of this book, we see how all three groups will eventually come together (in a future book, I assume). At times, the story seemed slow, and the requisite prepper had a few too many explanatory soliloquies. Other than that, I mostly enjoyed the different characters and how their actions shape them.

The narrator of the audiobook was decent. He certainly didn't detract from the story in any way, neither did he do anything to really add to the story. I would listen to this narrator again.

I would definitely continue reading the series.

Audiobook provided by the author in return for an honest review.

Another great book from Mr Nicholson. The premise is very real, a series of solar flares that shut down the world. The survivors are a very diverse bunch and, oh what a bunch. I really enjoyed this book from the very first page and can't wait for the next. It is full of suspenseful moments.

Can't do it, give me back my credit please.

Bad from the start and just kept getting worse. Narration is lacking, story line is more than lacking. The bugs on my windshield were more interesting.

Nicholson is an awesome story teller

This time we were not responsible, well, not really. The zapheads, as they are referred to, were the result of a massive, world-wide solar storm that wreaked havoc on the world’s technology killing and changing billions of people into zapheads. The world is different now, everyone is different somehow.

The zapheads don’t eat people but they do seek to kill in a most bloody fashion and they are learning to plot, strategize and attack.

There are three groups of survivors the story follows as well as the legendary survivalist grandfather. The survivors include a group of military like goons who are not very nice, two beer drinking surfer dudes, Rachel and then the group who treat the zapheads as deities.

Unlike most zombie books, Nicholson states what caused the zaphead affect – the solar storm; but not why some were affected and some were not.

Well written, Nicholson develops the characters as he moves the story along giving insight into the main characters. He draws the listeners into the story making them feel the same excitement and fear as the characters. He has a lot going on but not too much; it is still very easy to follow the plot and characters. There are slow moments where the action is building; but he is providing enough backstory to make the plot move forward.

If you enjoy zombies, action and a good story then Nicholson’s books are perfect for you! This is a good solid, interesting, captivating book but then again Nicholson never disappoints!

Kevin Clay, narrator, did a good job of narration. I enjoyed hearing him read the book.

There were no issues with production.

Or should I say, Zapheads! 'After' was an enjoyable and somewhat unique take on a solar storm that affects many survivors who change into the something of the un-dead variety. Packed with interesting and truly diverse characters that successfully drew me in and kept me listening until the end, Nicholson does a great job of unfolding an apocalyptic story that wasn't a cliched take on the genre. Kevin Clay delivers a good narrative performance. I would recommend this book to any friends who enjoy a solar storm apocalypse story!

I liked how the zombie, or zaphead, apocalypse was started in this book. That they were precipitated by a solar event was a refreshing take on the genre. I certainly find the prospect of fast zombies more terrifying than the shuffling dead of Romero and The Walking Dead. I love the zombie and post apocalyptic genre and thought this was a great addition.

The narrator was pretty good. A little dry at times, but the story had enough action to keep me going. I would definitely look for more from this author.

I was a little lost at first...

I was unsure of what was going on at first... I couldn't figure out if this was a Zombie story, Or an EMP story, or what it was.. I was wondering if I skipped a few chapters at first, so I even checked. things did get explained further in.
The book did pick up speed, but seemed to slow back down a bit in the middle, leading us all the way to a cliff hanger at the end.
this is not your typical zombie book.
I was voluntarily provided this free review copy audiobook by the author, narrator, or publisher.

I have been listening to zombie books for a long time and this is my first non-zombie world disaster book and I have to say I like it. I really enjoyed the premise and I loved the way the story weaves all of the characters together. I am looking forward to the rest of the series.

After Series is Awesome!

Would you consider the audio edition of After to be better than the print version?

I loved the print version and the audio version.

What does Kevin Clay bring to the story that you wouldn’t experience if you just read the book?

Kevin Clay brings life to the characters. He doesn't just read the book, he acts it out.

Scott Nicholson Rocks! His books have never disappointed me and the After Series is a wonderful story ride. I read the books and now listening to them makes them that much better.

The Start of a New Series

I've bought a number of Scott Nicholson Audiobooks and kindle books, but the ones I've read have generally been stand-alone, although often set in the Appalachians. The After series looks to be a much more prolific series than the others books. I was glad to get a review copy of this on audio, as I already had the Kindle version, and had enjoyed all the other books of his I'd purchased.

The setting of After is a post solar event apocalypse, where humanity is decimated, technology suddenly dead, and most humans were either killed by the event or transformed into zapheads, violent killers (think 28 Days Later). Some "normal" humans also survive, and the book gets into coverage of the lives of a number of unrelated individuals or small groups. As their stories progress, convergences between these survivors start to occur, and eventually you become aware of the underlying final link between these groups (and hopefully this becomes realised in the next book). The apocalyptic event was something different to others I've read, which is refreshing.

As with most series, there was no real end, but that is expected. A publisher "blurb" at the end of the audiobook seemed to indicate the next book was available on audio, or at least will be available soon. However, I didn't find the ending abrupt or left me on a cliffhanger, which I personally think is good. It may just be that I'm more jaded now after reading so many post apocalyptic books

Kevin Clay did a great job narrating. I've not listened to any other books he's narrated, and looking at his listing he must be relatively new. But I definitely had no problems following the story with his narration, especially one like this with so many character viewpoints and lines covered. Sometimes in multi character novels I really get lost. Part of that is the author, but I think the narrators also have a hand in helping with this.