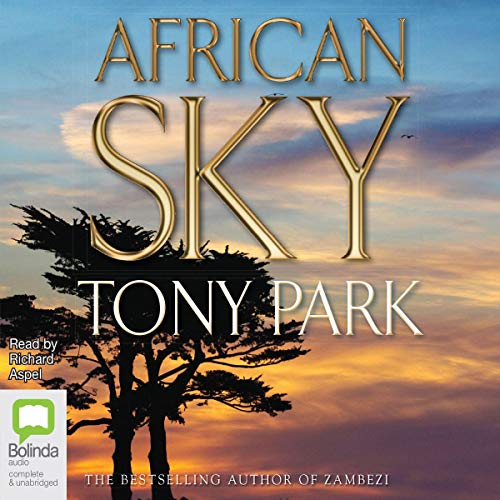 Paul Bryant hasn't been able to get back in a plane since a fatal bombing mission over Germany. So, instead, the Squadron Leader is flying a desk at a pilot training school at Kumalo air base, Rhodesia. Pip Lovejoy, a volunteer policewoman, is also trying to suppress painful memories. When Felicity Langham, a high-profile WAAF from the air base, is found raped and murdered, Pip and Bryant's paths cross. Pip unearths a link between the Squadron Leader, the controversial heiress Catherine De Beers and the dead woman. What Pip thinks is a singular crime of passion soon escalates into a crisis that could change the course of the war.

What listeners say about African Sky

I wish they would not use a narrator that can not pronounce simple Southern African words. I winced and shouted out the correct pronunciation to myself every time...It does spoil the book unfortunately...

The potentially good story-line was ruined for me by Aspel's diabolically bad attempt at a Rhodesian accent & litany of mis-pronunciations such as:-
"Yarn Smerts" for Jan Smuts; "Gwaylo" for Gwelo (as in bellow not as in halo); "Betjuanaland" for Bechuanaland (with a hard "C"); "Matabelly" for Matabele (with a long "ee" after the "b") and, most appalling of all, "Vankie" for Wankie in what was probably a pathetic attempt to avoid schoolboy sniggers at the name of the well known game reserve and mining town. If he was too embarrassed to say "Wankie" then why not just say "Hwange" the post 1980's version of the name?
I laughed at first but the ineptitude grew worse as the story developed.
NOT a good listen!

fantastic, great to see this author on audible.

Great story, from a great author. Tony Park, you have a fan. I have already bought another if this authors wirks.

Liked to the story African adventure, but not quite Wilber Smith. Would buy more Tony Park