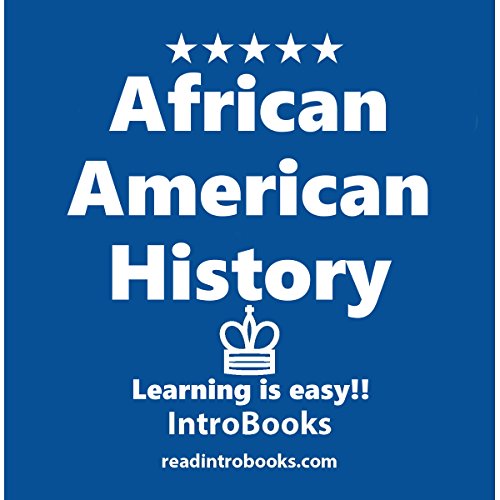 By: IntroBooks
Narrated by: Cyrus Nilo

The African-American history is fragment of America's history which precisely converses the black American traditional groups staying in United States of America. Maximum of this population are original people of Africa who were deliberately brought and kept in confinement in the United States of America from 1555 to 1865. Many blacks whose ancestors had emigrated from the Caribbean to America are also considered to be African-American as their roots go back to Central or West Africa.

They have been referred by many names in the American history like 'Negro' and 'colored', these terms are no more acceptable, African-American is an acceptable term and has a different implication completely.

Precisely what fragment of the African-American population is of exclusively African descent is unknown. In the past hundreds of years there has been a substantial mix of people from Africa with Europeans and American-Indians. Factually, the principal approach to racial group association in the United States of America has been that people having any Black-African roots are considered to be African-American.

The book discusses how they made their way to America and settled down here forcibly and adapted to the new environment. Their struggle to get their basic rights and how they finally came up emergent and now freely roam the soils of America with heads held high.

A brief look at the history of the black people who came in various ways.

A compilation of African American history into 45 minutes is abhorrent. To end the book with Barack Obama being president and now the African Americans have achieved equality is completely incorrect. There are still racial disparities within our country because of elitist white Americans who are afraid of what might happen if they were to treat black people equally.

Performance was very monotone and the timeline jump around. If redone with information, this would be an excellent short read.