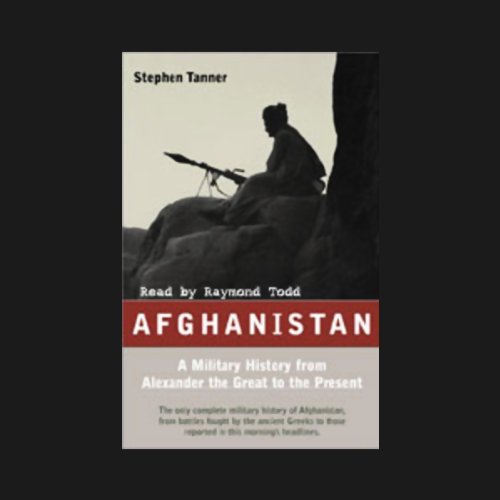 By: Stephen Tanner
Narrated by: Raymond Todd
Try for $0.00

For more than 2,500 years, the forbidding territory of Afghanistan has served as a vital crossroads not only for armies but also for clashes between civilizations. As a result of the United States' engaging in armed conflict with the Afghan regime, an understanding of the military history of that blood-soaked land has become essential to every American.

Afghanistan's military history provides lessons for us today. The earliest written records inform us of fierce mountain tribes on the eastern edge of the cradle of civilization. Alexander the Great conquered Afghanistan on his way from Persia to India. Later, because of its strategic location (the Silk Road passed through its mountainous northern region) Afghanistan was invaded in succession by Arabs, Mongols, and Tartars. In the nineteenth century, Great Britain tried, and failed, to add Afghanistan to its Indian empire, while Russia tried to expand into the same embattled land. Afghanistan once again fought, and defeated, a secular government in the face of rising Islamic resistance.

America has faced a new enemy on this land, a land that for centuries has become a graveyard of empires past.

"This is a noteworthy and valuable book: accessible, objective, informative, and informed." (Amazon.com)

What listeners say about Afghanistan

I listened to this just before I deployed to Afghanistan and was amazed at just how much of what was in the book is still relevant today. A great piece to put the conflict and hopes of Afghanistan today into perspective of the regions long history.

I chose this book after listening to "The Kite Runners". While this audio book contained a great deal of information, and was generally well-written, I wished I had had access to a decent map of the region while listening. I also was annoyed by the narrator who mispronounced a number of words and foreign place names and has a tendency to use a fake foreign accent when quoting from some sources (e.g. Russian or British). Nonetheless, these are minor quibbles about the book itself, which focuses on the history of military invasions of Afghanistan and of the civil war during the last two decades of the 20th century. I can't help feeling that the lessons learned about fighting insurgents by the Soviet invaders from 1980 onward are today being re-learned by American soldiers in Iraq. Overall this was a decent book.

Good until the end. Now the whole book is in doubt

Book was very good until the American invasion of Afghanistan, a topic that I know well. At that point there are so many blatant errors that now I question the accuracy of the rest of the book.

A blow-by-blow accounting of the military history of Afghanistan, labeled 'The Graveyard of Empires' for a reason.

Tanner does more to illustrate the history of this region than any other work I've come upon. Cited references, thoroughly conducted research, and what appears to be years of difficult scavenging the world round for information. The information is presented clearly and without embellishment. Topping it all off, the author offers his personal suggestion of how the world should treat Afghanistan moving forward; note that this information finalizes circa 2002.

Overall, this is stellar, high-brow research with easily accessed information.

Stop reading past 1990, it becomes an editorial not a history.

Good history book that turns into a slanted editorial take on the modern history. Many of his conclusions have been proven wrong

Yes, but not in an audiobook.

Was Afghanistan worth the listening time?

Worth listening to, but I would get more out it in a paper book because without maps it is sometimes hard to follow. It is a very well researched book and to someone interested in the total history of Afghanistan, this is a good start.

This is an area I have an interest in, I have spent some time there, so I could generally follow. However, without maps, especially during some of the ancient times, it can be hard to truly follow. Knowing locations of some ancient places when you are just listening can be tough to follow. I used the book as a refresher to brush up on some reading I had done years earlier and it succeeded. Nevertheless, Tanner does a good job of weaving personal touch stories into the works that keep it interesting. Todd does a good of narration. I did not encounter any problems with sound quality others had made.

As good local histories do, Afghanistan: A Military History places its subject into historical perspective and we get a glimpse of the Persian, Hellenistic, Mongol, Muslim, and British empires from the perspective of Afghanistan. The Twentieth Century history is just as compelling and provides a concise history of the Soviet war. The author has, of course, been overtaken by events in covering US involvement.

The book offered a compelling and engaging history of a nation so important to the world in the beginning of the new century.

However, Tanner completely botched the account of the Battle of Mogudishu in 1993 (he states that Pres. Bush called for the withdrawal when it was actually Clinton).

Also, I detected a bit of subtle anti-Israeli sentiment in the epilogue.

His fears of America as a robotic military superpower are slightly absurd. These two wars (Afghanistan and Iraq) have proven that boots on the ground will not be replaced by technology in our lifetimes. These so called "robots" are still heavily reliant on human guidance.

Good material, read by a computer...

Great material but the reader has no idea how to correctly pronounce names, geographic places, military hardware, or other things.

very informative book on the big picture of Afghanistan