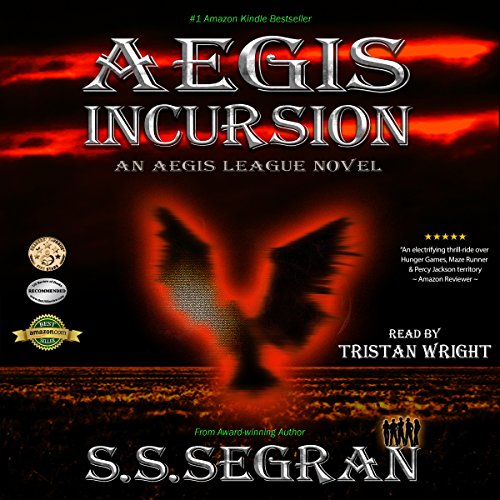 On a bright July morning in 1948, a B-29 Superfortress flying a top-secret research mission over Nevada crashes into the calm waters of Lake Mead and sinks, remaining lost for half a century.

It has been nearly a year since five friends - Jag, Kody, Mariah, Tegan and Aari - mysteriously reappeared in a small town in Yukon several weeks after their small plane went down in Northern Canada. All were found unharmed but with no recollection of what happened to them after the accident.

A baffling contagion is spreading across the bread-basket of North America destroying vital crops. As this dark shadow marches across the globe, widespread famine and riots bring desperate nations to the brink of war.

These seemingly unrelated events set the stage for a battle between the forces of darkness and those destined to become the "bearers of light". From ravaged fields in the Great Plains to clandestine installations around the world, the Aegis League must race against time to save humanity.

What listeners say about Aegis Incursion

A remarkable tale that sprang from two separate tragedies involving aviation accidents. You won't want to put it down! The storyline flowsfrom beginning to end; it's a hair raising adventure that you won't want to miss. If S.S.Segran isn't on your list of authors to follow you might consider taking the tim to add him to your list!

What made the experience of listening to Aegis Incursion the most enjoyable?

I enjoyed the way the author created dimension in the story by creating multiple plots that converge at certain points and also past experiences that influence the current story. I did not realize this book was a sequel until after I read it!

What other book might you compare Aegis Incursion to and why?

Aegis Incursion is a classic Sci fi type book, it is in its own vain, I can't draw a parallel to another book similar.

Have you listened to any of Tristan Wright’s other performances before? How does this one compare?

I have not but the narrator did a great job at keeping consistent voices throughout the book, which made it enjoyable and easy to follow!

Yes, I listened to this book consistently throughout work.

I was given this book for free in exchange for an honest review. I also believe although this book is exciting, it is quite easy to follow and I think it would be best for young adults. Still a good read for any age!

Where does Aegis Incursion rank among all the audiobooks you’ve listened to so far?

I'd say in my top 10! I've not read the first book. It states that you don't need to and you don't. Great characters and a great story made it impossible for me to stop listening.

I liked the mix of action and sci-fi around the good versus evil theme. The characters are also brilliantly written. They develop brilliantly as the book progresses and they are all really good.

Which character – as performed by Tristan Wright – was your favorite?

We have five young adults who are all effectively the main character of the book. They are all so well written that I wouldn't change anything about any of them and I wouldn't pick one over another. Very well crafted!

It's too long to manage in one sitting but I started listening on a car journey that took 6.5 hours so I got well into the book in my first sitting. I usually listen to a couple of books at a time to give myself an entertaining mix but I listened to this throughout the entire journey and even managed less rest stops alongside the way as I was so engaged. On my home home, with s journey of the same length, I jumped straight back into the book. So I'd say that you will get wrapped up in the story very quickly!

An excellent young author not to be missed!

What did you love best about Aegis Incursion?

I read the e-book before listening to the Audible version and Tristan Wright brings another layer of depth with his clear, articulate narration.

I love Segran's ability to blend five primary characters into one strong unit, each complementing the others, with support from several secondary characters rather than just one primary "hero". It gives an interesting muliple pov in my opinion.

What other book might you compare Aegis Incursion to and why?

I think Aegis Incursion, like it's predecessor Aegis Rising, is unique in YA fiction. It doesn't fit in any of the normal "boxes" and it keeps you wanting to listen to just one more chapter to see where the story goes next.

All my favorite scenes involved the good guys tromping the bad guys, of course! :)

I don't want to give anything away so I'll just say Aari's Grandparents.

Shirin's books are a wonderful addition to the YA genre and with her talent and dedication I predict nothing but great things for her in the future. Here's to a long and prolific career as a writer of great fiction!

The author provided me with a complimentary copy of this audiobook with no expectation of a review. This book was even better than the first one. I didn't want to stop listening to it and stayed up far too late for just one more chapter. To be honest, I didn't think I was going to like this series based on the title, the cover, and the description. I got the first book in the series for free in 2014 but hadn't ever read it because it just didn't seem like my kind of book. Then the author gifted me this book, so I decided to give the series a try, and I'm glad I did.

The imagination of the author is really amazing. The world she created in the first book was great, and in this book, the kids are back in the "real" world. They go on a road trip and along the way they have to use their powers to battle evil to literally save the world. Along the way, they meet some new friends and old foes. I can't wait to find out what happens next with this series!

I've read a great deal of Apocalyptic books, and I have to say this one hits the mark. Well written, and educated seems to fit the bill. The storyline is interesting, and the characters developed. Great book!

Intertaining, but written on the simplistic side.

It took me a while to get into this book, it was a slow start because of backstory development and character building. All that would have been interesting except the dialog is on the basic side, even for the portrayal of teenagers, and it is not very descriptive. The narrator does a decent job except his girl voices are terrible and made it hard to listen to. If there was more dialog involving the girls I probably would not have made it through.

The story is interesting and would make a good screen play, maybe what the author is going for, but for a more sophisticated reader your probably going to get bored.

Overall it was worth the time and kept me mildly intertwined.

This book was provided by audioblast at no cost to me in order to get an unbiased review.

I enjoyed this Good vs. Evil book. A "coming of age" story of five lifelong friends teens.

The story-line clearly developed each character as they grew. Loved the SPECIAL traits of the teens. What really impressed me was the moral strength of these kids. In the face of Life & Death they kept it clean. No drugs, No heavy swearing, No sex, No drinking! Such a pleasant change over most books. A bit unrealistic in today's society but gives the Teens a chance to explore Adult feelings as they grow older.


This book was provided to me at no cost by the author, narrator, or publisher in exchange for an unbiased review via Audiobook Blast

There is something about a 13 hrs and 53 mins book that always makes me smile and think: This is good, or really really bad. So what is the "magoo factor"? Magoo was blind, (read the cartoon!), and i go in blind into all books i read for free. I try to not read about the book before i get it free from AudiobookBlast dot com. One because i like to be surprised, and the other that i can be more honest about what i think. So this scored 4 out of 5 in my "magoo factor", and that makes it a really good but not perfect book.

Reminds Me of a YA Tom Clancy Novel

What did you love best about Aegis Incursion?

The story really held my attention. It was fun. There were a lot of characters, but the way the book was written and read made it easy not only to tell the characters apart, but to get to know them individually.

I thought the comment about FOX News was hilarious- around chapter 40.

What does Tristan Wright bring to the story that you wouldn’t experience if you just read the book?

He did each character voice very well. I have to say, the voice he used for the girls reminds me of Tea from YuGiOh the Abridged Series, and that was distracting.

The way the tribe of Native people was portrayed both in writing and speaking was problematic for me. I consider it racist to portray that group of people as mystics. The mystic trope for native peoples was invoked, and it didn't sit well. I wish they were portrayed with more sensitivity.

This audiobook was provided free of charge in exchange for an honest review via Audiobook Blast.