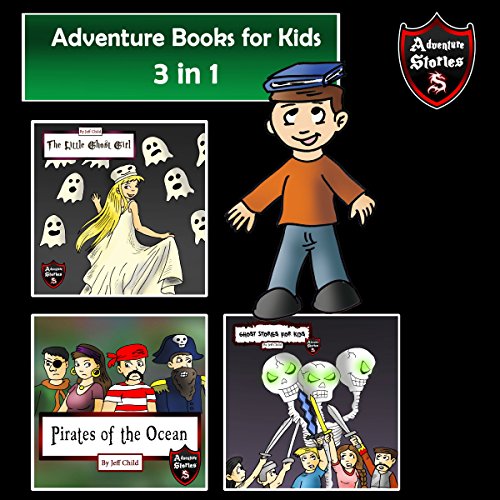 Adventure Books for Kids: Action-Packed Stories for the Kids

Adventure Books for Kids: Action-Packed Stories for the Kids

Three stories in one book.

Story 1: Haley has a way with the ghosts, and even though everyone in town assumed they were hostile and would attack you immediately, Haley discovers otherwise. She heads to the forest and finds a group of fire-spitting ghosts that are eager to involve her into their little community. Other dramatic events occur, and a war between huge spiders and the same group of ghosts is in the air...a battle that could end well...or not...listen quickly to find out.

Story 2: Shorty Seaweed has gone on many journeys across the seas, but in this adventure, he thinks it's worth mentioning what happened and he writes it all in a diary. He fights sea monsters, skeletons, and other enemies, faces volcanoes and deserted valleys, and meets his true love on the way. Listen to this fun and exciting story about a pirate and his friends who go on an intense adventure!

Story 3: These two stories will give you the shivers and make you laugh at the same time. The first is about Terry, a village guard who gets haunted by a ghost. Together, they fight skeletons and defend the town's borders, until something happens to Terry that makes him invincible. The second story is about a mother and her two daughters. They inherited a haunted house but they are still discovering why there is a ghost in their gigantic, creepy-looking house. Is the ghost trying to tell them something, or does she just want to scare them? Start listening now and find out....