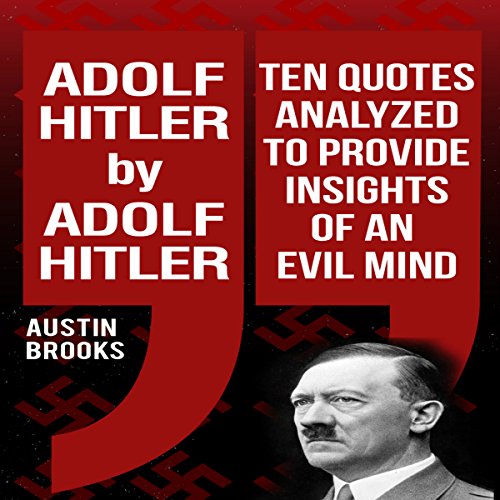 By: Austin Brooks
Narrated by: Robert Daverin
Try for $0.00

Trying to understand the nature of evil through the Nazi dictator's own words.

Every quotation is followed by a thorough explanation of its meaning and how Hitler's ideas were implemented in the search for power and military conquest.

What was Hitler thinking about? What did he say and think to make his incredible rise to power possible? What made Hitler so appealing to the German people? This book will illustrate for you the authoritarian and fascist values, so you may stay focused on what is necessary to keep democracy alive.

This book is an attempt to shed some light on one of the darkest minds of the modern world. Almost a century after Adolf Hitler's first taste of power, the sole mention of his name recalls the particular unease of an old wound that has changed the world forever. There are still survivors who find no peace of mind, and there are still questions that the world needs to ask. This book is only part of that quest for answers. It provides an insight into the historical facts through Hitler's own words, through his particular view of the world.

Why is this important? Why should you care? Our democracy is threatened from the inside and the outside, and it is now more important than ever to understand and uphold the values of freedom and democracy.

Here is a preview of what you will learn:

Purchase now, and start listening to this great book!