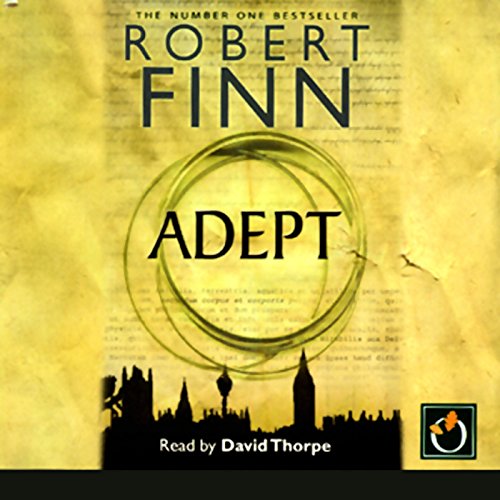 When insurance investigator David Braun probes a particularly violent break-in, the crime scene raises more questions than it answers. Turning to Susan Milton of the London School of Antiquities for help, they find themselves the target of a ruthless and elusive killer as they risk their lives to expose a horrifying centuries-old secret.
©2004 Robert Finn (P)2005 Oakhill Publishing Ltd.

Finn tries really hard to not be silly, and he almost succeeded. But there was just too much cartoonery and unlikeliness. If it were possible, I'd raise him to a 2-1/2, because it was borderline.

Audio:
The reader has a nice voice -- sounds remarkably like Hugh Grant. He doesn't do accents very well, though, nor women. On the whole, he's better than most.

The main character is mostly uninteresting but becomes involved in a mystery that is interesting enough -- but so awfully average.

Well read...but the storyline will blend in with every other thriller you've read.

I was hoping for more from this one. The plot description caught my attention, and I admit to liking a plot-driven piece of ear-candy now and then. But I want at least a modicum of explanation and plausibility.

Everything, and I do mean everything, is magical in this book. There are huge inconsistencies that are leaped in a single bound - magically. Weird character flaws and again inconsistencies that are simply glossed over - magically. The plot twist at the end was thoroughly predictable and even the ending was hole filled with questions regarding all of the character's motives.

Apparently there is a sequel, although not on available on Audible.com, called Ex Machina. As in, Deus Ex Machina. God from the machine? Seriously, I wouldn't be to certain that more information or explaination will be forthcoming in a sequel the title of which refers to the hackneyed plot device of an improbable character or event simply appearing to make the way smooth for our heroes...

Skip this one, Ladies and Gentlemen.

Unlike some of the other reviewers, I really liked the narrator. Maybe his accent wasn't perfect, but he did a great job jumping between characters and holding our interest.

Very intriguing plot, but, boy, was the ending ever a letdown. Seems like at some point in writing the last chapters the thought of a sequel suddenly weighed strongly upon the author, who therefore decided to devote the climax to preparing us for his next book. So, the ending was a bit of a dud, but overall a great listen.

Good book, no doubt, and the narration was mostly good. The only problem I had was the American accent. I think they would have done better to do a cast version. Other than the accent, though, perfect.

I thought that I was going to quite like this book - it started off well, an intriguing crime scene and an interesting lead. However, this was not what I was expecting. From the blurb, this sounded like a straight thriller, but it soon becomes clear that the baddy has strange, mystical powers. Now I don't have anything against this genre, but it was not what I was expecting, and I don't think it was particularly well done. Secondly, the male lead disappointed me. After starting off promisingly, he turned into a bit of a wet blanket when it came to the female lead - I may be lacking a sense of romance, but I'm just not sure she was worth it! She didn't have any real depth, but she had unresolved issues. Finally, and my biggest gripe of all - the ending was a farce. **SEMI-SPOILER AHEAD** At the denouement, a completely new character, not even hinted at in the rest of the book, is introduced to tie up the plot. And then after the final action scene the author switches to a series of emails to draw the story to a conclusion. Very disappointing - almost like the author got so far into the book, got bored, and just wanted to finish it - new character, series of emails - done. However, thought the narrator was good - some nice characterisation - in fact that's probably what kept me going to the end. I might have given up otherwise. Not recommended!

the story was good and had some intresting twist but I felt the ending was rushed.