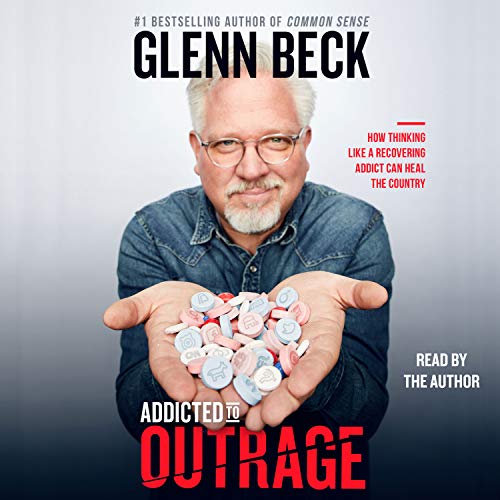 America is addicted to hatred, we're at the height of a 20-year bender, and we need an intervention.

In Addicted to Outrage, New York Times best-selling author Glenn Beck addresses how America has become more and more divided - both politically and socially. Americans are now less accepting, less forgiving, and have lost faith in many of the country's signature ideals. They are quick to point a judgmental finger at the opposing party, are unwilling to doubt their own ideologies, and refuse to have any self-awareness whatsoever. Beck states that this current downward spiral will ultimately lead to the destruction of everything America has fought so hard to preserve. This is not simply a Republican problem. This is not simply a Democrat problem. This is everyone's burden, and we need to think like recovering addicts and change.

Mirroring the 12 Step program, Beck outlines the actions that Americans must follow in order to prevent a farther decline down this current path of hostile bitterness. Drawing from his own life experiences and including relevant examples for each step, he is able to lead the reader to a more hopeful, happy future. From families who learned to forgive killers to relearning to believe in something greater than ourselves to understanding the importance of humility, each chapter encourages self-reflection and growth.

Addicted to Outrage is more than one of Glenn Beck's old political books. It is a necessary guide for how Americans, right and left, must change to survive.

What listeners say about Addicted to Outrage

Glenn reads this with all the energy that he wrote it with. I listen to a lot of audible books and all around it was the greatest book I’ve heard. It made me laugh out loud, made me worry, made me think. Anyone who doesn’t understand how our country got here and what’s to come and what we as people can do to help fix it, at least those who love our country, need to listen. I promise you will want everyone to listen to it too! Thank you Glenn

A great insight into how we are being manipulated.

Glenn Beck lays out all of the research into how the American population in general is literally addicted to outrage, and how we can break free.

This was a thought provoking book. I dont see eye to eye with Mr. Beck all the time. possibly 70% of the time. but he does come across as honest and thoughtful. I recommend this book to anyone right or left politically.

I can't take the time to write a review worth merit at this moment, but take the time to listen/read this book! So truthful and eye opening. Thank you Glenn for putting yourself out there for all of us. Thank you for taking the time to build and share this story. I feel your passion and it inspires me to learn more.

This is Glenn's first book in years that I really enjoyed and would say is 5-stars. He addresses our biggest issue right now, and that is the fake outrage that sweeps through everything we do. Manufactured, meant to divide, meant to drive people into smaller and smaller subgroups so they need the protection of big government, it's a far left anti-western campaign to bring down our culture. Glenn deals with this in a very fair way, in fact I'd often say way too fair to the point of almost being passive in allowing lestist narratives to survive despite them having no grounds in reality. However I say ALMOST too far since the book isn't about surrendering or giving in, it's more about how to make points and how to get Democrats (not the far left nujobs, but your normal Dems) to realize what is happening. I'm not as sure as Glenn that these people exist in large numbers and will rebel and take their party back, but we shall see.

Anyways this book would be an excellent read for anyone that is trying to live and/or work with people on the left and want to know how to reach out to them in a way that they'll accept. This is not a red meat conservative book, it's as balanced as it can be for someone who is conservative, and it doesn't violate that belief system. Also it's an entertaining book, it's not boring or dry and doesn't lecture, it's Glenn doing what he does best, and that is telling stories.

Glenn also narrates the book and does a fantastic job, as you'd expect from someone that has done radio his entire life. This is not a straight boring read, it's done with emotion and humor, which is a very good thing. Also Glenn goes off script here and there, which is refreshing.

Overall this is a 5-star book and should be a must read for people that want to understand what is happening and how to read out to Democrats who haven't gone full alt-left yet. It should be must reading for anyone that considers themselves in the middle as well as Democrats who want to understand why there is such a rebellion against the SJW culture.

Ideal concept for everyone!

I don’t always agree with te author but this isn’t something I can agree with! We must get back to just being Americans!

There is hope for America

I absolutely loved the message of this book. Once we understand that the success of our country and our future can only be achieved when we set aside our partisan politics and stop allowing others to keep us divided by the points we disagree on, we can come together in areas of common ground. Allowing politics to become religion is killing our country and striping our future from the hands of our children. We must model the behavior we want to see in our future. Regardless of our beliefs we do not have to be enemies. Treating one another with mutual respect should be our baseline, not this addiction to outrage we have become accustomed to. Let's talk to one another with mutual respect and rather than seeking to be right, seek to understand. The future of our country and the legacy of our children depends on it.

This is a really great and necessary book

I am not an American. I'm Brazilian, but I was lucky enough to have had the opportunity to live in the states in my teenage years. Having had the opportunity not only to live there, but also to study American history in high school, I have always had great admiration for the ideals, and the values on which your country was built. It seems deeply troubling to me to see the american people loosing sight of those very ideas that the founding fathers based your government on. I truly believe that those ideas are at the heart of western civilization's survival. Glenn does a great job of going over how our addiction to outrage on social media is tearing apart the very fabric of society, and putting our democracies in jeopardy. I say our, because I feel that the same thing is happening in Brazil. His message is powerful, and a necessary one. I too share his fears about the world in the coming years. Let's hope more people can hear this message and spread this attitude. After all we're in this together!

So many people say that they are “tolerant”, but they will not even listen to Glenn because they KNOW that he is a racist, homophobic, intolerant hater that just hates. They know this, not because they have heard his “hateful” words, nut because they have been told that’s how he is. If you are one of those people who has never listened to Glenn Beck on Radio, tv or in print or audio book, be as tolerant as you say you are. Be as tolerant as you expect him to be. Give him and his opinions and ideas a chance. If you disagree, fine. Lay out your own thoughts. Make your own coherent points and present them.

Great book! I was hooked all the way through and didn't want it to stop! Changed my perspective of life, the world and people. Everyone can learn something from this book and should read and share it!

A few gems in here

As a non-US listener, I found the USA history stuff a tough listen. Yes, I understand the importance in the broad context, but this is a worldwide concern in Western countries, not just a USA issue (my fault as I should have understood the slant of the book better before selecting). Despite this, quite a lot of food for thought in here, and a few gems to take away. Recommended.