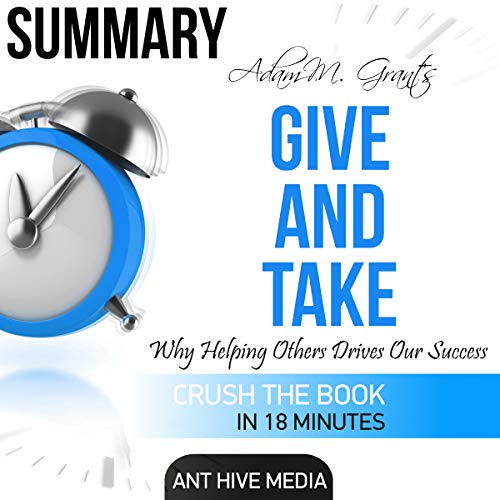 Adam Grant's Give and Take: Why Helping Others Drives Our Success Summary

By: Ant Hive Media
Narrated by: Kevin Theis
Try for $0.00

This is a summary of Adam M. Grant's New York Times and Wall Street Journal best-seller, Give and Take: Why Helping Others Drives Our Success

For generations, we have focused on the individual drivers of success: passion, hard work, talent, and luck. But today, success is increasingly dependent on how we interact with others. It turns out that at work, most people operate as either takers, matchers, or givers. Whereas takers strive to get as much as possible from others and matchers aim to trade evenly, givers are the rare breed of people who contribute to others without expecting anything in return.

Using his own pioneering research as Wharton's youngest tenured professor, Adam Grant shows that these styles have a surprising impact on success. Although some givers get exploited and burn out, the rest achieve extraordinary results across a wide range of industries. Combining cutting-edge evidence with captivating stories, Grant shows how one of America's best networkers developed his connections, why the creative genius behind one of the most popular shows in television history toiled for years in anonymity, how a basketball executive responsible for multiple draft busts transformed his franchise into a winner, and how we could have anticipated Enron's demise four years before the company collapsed - without ever looking at a single number.

What listeners say about Adam Grant's Give and Take: Why Helping Others Drives Our Success Summary

This a book summary.

IT is a great way to decide whether or not you want to read / listen to a specific book. Personally I like to hear a longer summary before reading a book. A 1 or 2 minute sample sometimes does not give you enough information.

The narration was excellent. i would listen to Kevin Theis again.

I received this audtio book at my request and have volunatarily left this review.

I don't have time to read books that aren't extraordinary, so I listen to the summaries to decide if the book is worth my time.

After this summary I now realize reading Adam Grant's give-and-take will be an exceptional use of my time.

Not A great story. it summarized various events and didn't give an Inspiration to take away.