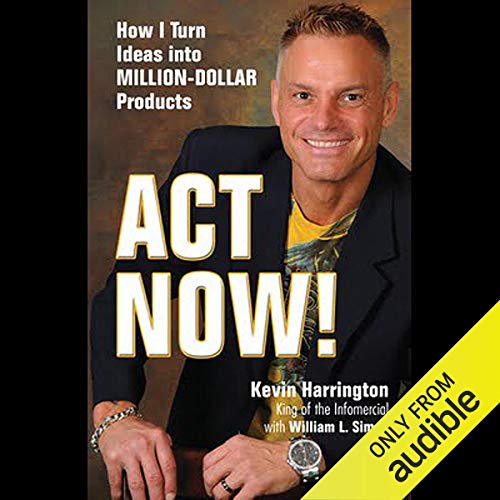 By: Kevin Harrington
Narrated by: Robert Pavlovich
Try for $0.00

The Ginsu Knife, the Great Wok of China, the Food Saver, Tony Little's Ab Isolator--all have sold millions and have become household names thanks to Kevin Harrington's insightful vision to bring the traveling salesman's pitch to television. Since the late 1980s when Harrington's first infomercial aired, the extended commercial, or infomercial, has become a social institution and an intriguing way for anyone with drive, determination, and a good product to become wealthy beyond his or her dreams.

Some people take life as it comes; some grab it by the ears and shake and shake. Kevin Harrington is one of the shakers. When he has an idea, he 'acts now!' and he doesn't get discouraged by challenging situations--he finds a way around them. The story he tells in Act Now! is partly about his role in bringing about changes in the industry and the business methods, marketing tactics, and strategic decisions he's made along the way. Budding entrepreneurs, creative inventors, and ambitious businesspeople will reap the benefits of Harrington's insights - how he chooses his products, what criteria he demands of his infomercials, and the details surrounding his choices in spokespeople, timing, and synergy.

What listeners say about Act Now

From a Thinker To A Product Genius

After hearing Kevin speak at a local event, and seeing him on several episodes of Shark Tank, I knew there was something remarkable to learn from him.

His work with As Seen On TV is brilliant and I admire his documenting how he built this empire and brought success to dozens of would be inventors and entrepreneurs, while overcoming the challenges of life and running a business.

This is a great read for any creative struggling to get his idea off the ground or entrepreneur going through a tough starting time. Kevin's persistence is legendary and anyone following his words of wisdom and giving their all can achieve success and wealth from their ideas.