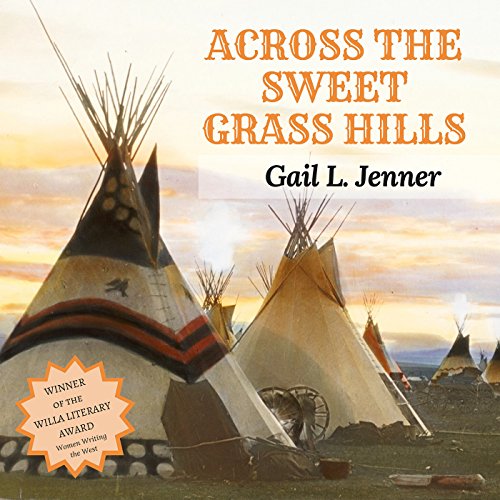 Across the Sweet Grass Hills

Liza Ralston has had more adventure in her life than she ever wanted. Leaving her settled existence with friends and family in St. Louis to travel to the Big Sky country of wild Montana with her father, she soon wishes she could turn the clock back. When their scout is murdered and her father is severely wounded by thieves, the Pikuni tribe, led by Crying Wind, takes them in. But Liza wants nothing more than to return to St. Louis, despite her growing attraction for Red Eagle, the handsome son of a white trapper and Blackfeet mother.

Red Eagle has tried to help Liza and her father, but Liza has a mind of her own. She doesn't understand that the refined ways of civilized society in St. Louis have not yet reached the untamed land she is traveling now with her missionary father - a man who has secrets of his own that he is unwilling to share. She is left with no choice but to accept the help of Red Eagle's tribe to save the life of her father. But the events leading up to Baker's Massacre of 1870 force her to discover a new path for herself - a path leading to love, redemption...and revenge.

Will Red Eagle and Liza find the love they've been waiting for? Beauty, treachery, and danger lie Across the Sweet Grass Hills.

Across the Sweet Grass Hills won the 2002 WILLA Literary Award for Best Softcover Fiction, by Women Writing the West. It also placed as a quarter-finalist in the 2000 Chesterfield Film Project.

What listeners say about Across the Sweet Grass Hills

What a wonderful story!

I thoroughly enjoyed listening to this book. It is filled with American History, memorable characters, and a wonderful story that doesn't disappoint. This author weaves a beautifully written tale of Liza and Red Eagle. Their journey across Montana is not just an adventure but a learning experience for both of them. It's a story that sticks with you long after it's completed. It's a clean read and is appropriate for all ages. 4.5 Stars!

Narration was nicely read. She is one of those narrators that grows on you as the story progresses. :-)

I highly recommend to all those who love Romances with American History.

My thanks to the author, narrator or publisher for providing a copy of this audiobook in exchange for my unbiased review. :-)

This is a fairly new genre for me. I don't care for western movies but I wanted to give this book a try. It is such a well written book! It sucked me in from the beginning. It was tough to see how bad things were between the soldiers and Native Americans. The prejudice between them was so crazy and unbelievable.

It took awhile but Liza eventually figured out that not every soldier was honorable and not every Native American wanted to scalp people... There are good honorable people in every race. As there are evil doers...

The book is told in multiple POV. You really get a good glimpse at each character's feelings and behaviors.

The author is extremely talented and she weaved such an amazing tale depicting how life was back around the 1800's... It is crazy to think how different everything was back then...

An uncomfortable listen but well-written

This book was upsetting to listen to. The prejudices and hatred between the White settlers and the Native Americans was too well-written. I found myself squirming quite often and had to fight the impulse to stop listening. (Way too much truth.)

I did not stop listening, of course, and even though it was uncomfortable, this was a story that needed to be experienced.

The narrator was the best part of this experience. She handled the pettiness of early Liza incredibly well and as Liza matured, the narrators cadence changed to reflect the difference. The change wasn't so much noticeable as it was felt. Now that's perfect narration.

If you can get through the uncomfortable moments, this listen is well worth it.

Across the Sweet Grass Hills

This is a western, historical romance fiction. Liza ans Red Eagle meet and there is a spark between them. Liza is upper crust society from St. Louis, while Red Eagle was the son of a Blackfoot mother and a white trapper. The trip across Montana is filled with all kind of perils. Will they find love or will they be torn apart.
I did enjoy the fact this was a clean book.

The narration was well done. The characters were well portrayed. Serena Travis gave each character a voice, even though I felt "read to," instead of a part of the story.

This book was really well researched and gives you many factual points in the storyline but the story itself I found to be very slow. The reading style of Serena Travis was stilted in places and I didn't like the sudden burst of music at points in the story. That said if the book was condensed down I would have enjoyed it much more.

Where does Across the Sweet Grass Hills rank among all the audiobooks you’ve listened to so far?

It ranks somewhere close to the bottom. It was well written and so very true.

I liked several but the hero was my favorite. He was true to Liza from the beginning.

What does Serena Travis bring to the story that you wouldn’t experience if you just read the book?

She gives each character a voice but at times she does not seem to know how to make the Native Americans voices.

I got this book via audiobook boom. This is my voluntary review.

This book was very drawn out. There were pieces of the story line that I didnt think were relevant to the story and just drew it out.

Red Eagle was my favorite part of the book. His devotion to Liza, maybe misplaced but, it was beautiful to see his love transform over the course of the story.

Did Serena Travis do a good job differentiating all the characters? How?

At times yes. But her interpretation of how Natives speak was very difficult to listen to. There were instances where her narration sounded like a robot, very clipped and mechanic.

Did Across the Sweet Grass Hills inspire you to do anything?

I provided this review in exchange for a complimentary copy of the audiobook from the author, narrator, or publisher.

I received a copy of Across the Sweet Grass Hills from the author via AudioBoom in exchange for an honest review. Listening to the story was painful - the pace was SO slow, with incredibly long pauses and ridiculous short music insertions that were meant (I assume) to show breaks in the text. The notes used (3 or 4 variations) sounded like bits from some 1950s or 60s tv show meant to indicate suspense, but they served here to increase my irritation. I often listen to books at l.25 or even sometimes 1.5X the recorded speed; this is the first book I ever listened to at 2X, but even then it was at times too drawn out. As for the story itself: it, too, was painfully drawn out. The author obviously undertook significant research to write the book, and her afterward included actual page numbers for sources. But too much research can weigh down a story, and that is definitely what happened here. To compound the problem, Ms. Jenner's protagonist, Liza, is downright unlikeable for most of the story. She whines, she berates others, she changes her mind repeatedly, she runs away in embarrassment or stalks away in anger. It all got real old, real fast. I actually gave up about 60% through and skipped to the last chapter, something I almost never do. Treatment of Native Americans was despicable during the setting of the story (it starts in 1869), but there has to be a way to respect the realities of that setting and tell a good story without torturing the reader, as well.

Entertaining, but it took me a minute to decide

Where does Across the Sweet Grass Hills rank among all the audiobooks you’ve listened to so far?

I wouldn't say it is the best, by any means, but it was entertaining enough to say I would rate it a good 5 or 6 out of 10. It took me a bit to get into it though...slow start...but this isn't exactly my genre of choice

Meh...could have been better I suppose. I wasn't super impressed, but I wouldn't say I was disappointed either. Like I said--a good 5 or 6 out of 10...

What does Serena Travis bring to the story that you wouldn’t experience if you just read the book?

Okay, now I will say this...she actually did a pretty decent job. This is my first time to hear her performance, and I was pleasantly surprised and impressed.

Not really, but like I stated before, to be fair this isn't actually my genre of choice.

Three and a half stars

I found that the plot is good and I liked the twist in the story. The authors shows us that she has done her research and new what she was talking about. However I found it slow to begin with. You have to keep reading before it gets better. I didn't like the heroin so much, i found her to be annoying and we are told what the characters are feeling instead of been shown.

The book is not bad and I would still recommend it.

This has been a harrowing book to listen to. Such a crime against humanity should never be forgotten, what was done to the American Indians. I am however glad I did listen to it because we all need to be aware of man's inhumanity and learn from it. This should never be allowed to happen again. We have to understand that all people are equal and should be treated as such. This story is beautifully written and has tried to be as honest as possible. It is sensitive in parts but brave enough to show how brutally the Indians were wiped out. My heart grieves for them may they always be remembered.