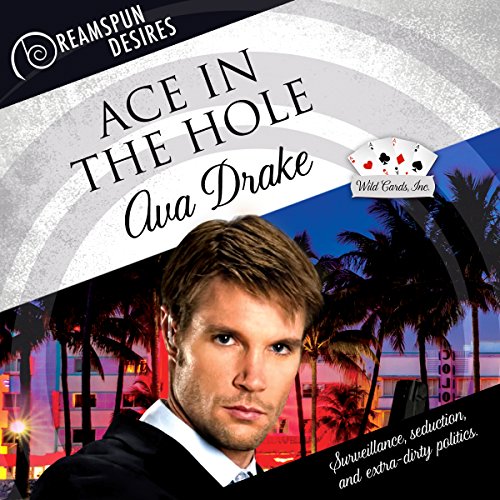 Ace in the Hole

Christian Chatsworth-Brandeis has a problem. A huge one. The US senator he works for has run away with his latest mistress on the eve of a make-or-break fundraising event, and it's up to him to cover his boss's irresponsible tracks.

Stone Jackson, the senator's new bodyguard, looks enough like the senator that, with some extensive grooming, he might pass for Senator Lacey. Christian and Stone hatch a plan to fool everyone by substituting Stone for the senator, but Miami madness and the incendiary heat between them are throwing obstacles in their way. It's a race to find the senator and pull off the con of the century before the attraction between them spins completely out of control.

What listeners say about Ace in the Hole

If you love action/adventure and politics...

From the blurb we see that our main “trope” here is falling for the guy who’s pretending to be someone else. In this case the politics and the intrigue really do vie for attention with the relationship only just barely edging that out as the focus.

I loved seeing the very toppy Stone come in and manhandle Christian. He’s been forced to diminish that part of his nature due to his name and career. I was hoping this would lead to a frenemies type thing with angry sex and then a build to a relationship but … instead we get a more involved political drama and intrigue story.

While that made this story a bit less appealing to me than I would have liked (I like it when the relationship is the center focus of the story) , that alone wouldn’t have bothered me as much if it weren’t for the HFN ending that was so tepid. I just didn’t feel the strong romance with these guys that I longed for. There was lots of chemistry but not many feels. I’m not sure if the following books in Ava Drake’s series are meant to be about these guys or new characters, but I hope it’s about these guys and we get more. I’d definitely read more about them if I was guaranteed more feels.

So… if action/adventure/politics are your thing – this was easy to read and fun, but if a sweet romance is what you’re looking for – keep looking.

John Solo really knows how to do alpha males. He gives Stone this deep, drawly, raspy voice that was pretty delicious. Christian is maybe lighter than I would have pegged him for, but not effeminate. John is good with timing and voice quality and always delivers a solid narration. Sometimes his voices are a little OTT but I think it suits the tenor of this story. I think he definitely adds to the overall experience here and increased my enjoyment of the story overall.