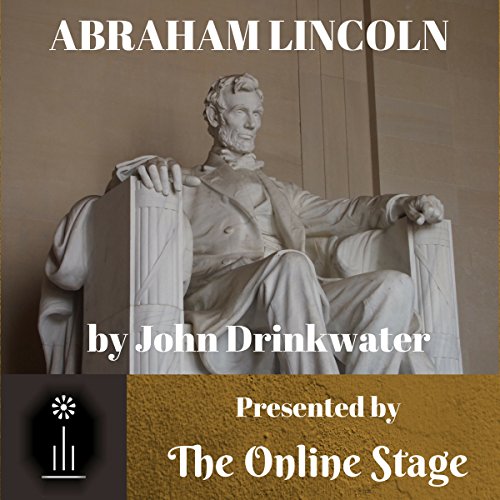 Abraham Lincoln
A play by John Drinkwater
Presented by The Online Stage.

In survey after survey, Abraham Lincoln is universally ranked as the greatest of America's presidents, setting standards for honesty, courage, compassion and ethical responsibility. John Drinkwater's play was the British poet's first theatrical success, opening in England in 1918 to surprising acclaim and making its way to Broadway in 1919, to even stronger public enthusiasm. It was produced on radio by Orson Wells on August 15, 1938, on his program, The Mercury Theater on the Air. In 1924, a two-reel film version of the play was distributed nationwide, one of the very first sound films, and on May 26, 1952, the play was presented on television on the anthology series Studio One, with film icon James Dean in a very noticeable supporting role.

After a brief poetic prologue, the play depicts six scenes from Lincoln's life that illustrate key aspects of his remarkable character:

This is the first time I have ever listened to a play as an audiobook and I really enjoyed it. All the narrators did a fantastic job and the play was really interesting!

The play is interesting but a little hard to follow since there's no description of what is happening. I did enjoy hearing about different parts of Lincoln's life from his perspective and that of those close to him.

It's strange but interesting to listen to an audio book with so many narrators, but it works well in the play format.

First released in 1918 this play distils Lincoln's life down to six scenes, focusing on his Presidency and the Civil War. Starting with his Republican nomination it moves through to his assassination.

As a dramatisation it is impossible to know exactly how close to the real Lincoln this is, and being so condensed it is hard to capture a whole lot of nuance. It does touch of some of his changing stances (such as moving from a position of not expanding slavery through to complete abolition) and some problems that caused around him, but otherwise it's a fairly simple, if impressive, image of who Lincoln was.

If you are looking for an in depth book to learn something new about Lincoln then this isn't that book. But if you want a simple primer and overview, then this is a good place to start. It tells you ho he is, what he was like and sees key moments in his life. There is only so much that can be fit into a 2 hour play, and this does well in putting it together.

Written originally as a stage play, it translates well to a radio play. with sound effects supporting the story it is easy to tell what is going on and where it is in the timeline. It may not always be clear who the individual people are, but I didn't feel that matters. I don't need to know that Person X is the head of his cabinet or whatever, as long as it is easy to follow the story and the ideas presented by the people in the play.

With individual actors for each part it is never confusing who is talking and what is going on. The production is good quality.

An enjoyable play, well put together and easy to listen to.

Not what I expected...

This was not the biography I expected. I am big fan of Abe, and was hoping to learn more about him. This was more of a play.

Narration was was good though..
I was given this free review copy audiobook at my request and have voluntarily left this review.

Elegant, thoughtful, and totoly not for me.

To all the narrators, awesome job. I cant think of anything really negative to say about your performance. Likewise to John Drinkwater I think your piece is well written and elegant. Unfortunately I have an impossible time trying to get into period pieces so keep that in mind. For me personally it was just very hard to get into a book like this with older speech patterns and turns of phrases. The fact the book is only 2 hours long and doesn't give you much time to sink into it and become accustomed to it may not be a bit help either. However if you do like period pieces and shows I can easily see this book being a 5 star for you.

I received this book in return for an honest and fair review.