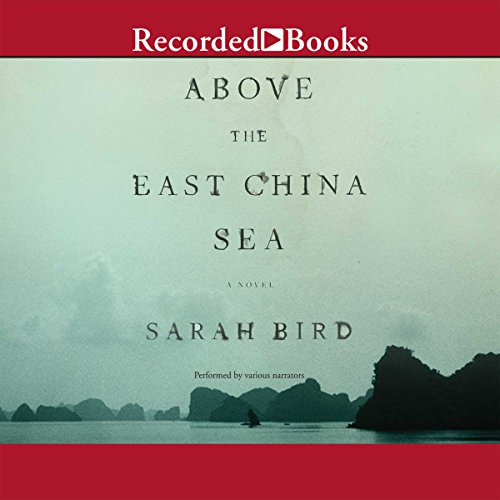 Above the East China Sea

Set on the island of Okinawa today and during World War II, this deeply moving and evocative novel tells the entwined stories of two teenage girls - an American and an Okinawan - whose lives are connected across 70 years by the shared experience of both profound loss and renewal.

Luz, a contemporary U.S. Air Force brat, lives with her no-nonsense sergeant mother at Kadena Air Base. Luz's older sister, her best friend and emotional center, has died in the Afghan war. Unmoored by her death, unable to lean on her mother, Luz contemplates taking her own life.

In l945, Tamiko has lost everyone - the older sister she idolized and her entire family - and finds herself trapped between the occupying Japanese and the invading Americans whom she has been taught are demons that live to rape.

On an island where the spirits of the dead are part of life and the afterworld reunites you with your family, suicide offers Tamiko the promise of peace. As Luz tracks down the story of her own Okinawan grandmother, she discovers that the ancestral spirits work as readily to save her as they do to help Tamiko find a resting place. And as these two stories unfold and intertwine, we see how war and American occupation have shaped and reshaped the lives of Okinawans.

What listeners say about Above the East China Sea

Perfect Blend of Past and Present, Them vs. Us

This is a departure for Sara that might put her in the literary hall of fame -- Sara is a writer for Texas Monthly and lives in Austin, ( I think?). Thank you Book People in Austin for putting this one on my horizon.

This book about Okinawa then and now is beautiful and haunting and wonderful, and I'd like to go hear Sara discuss how she wrote it. It somewhat reminds me of The Good Earth meets Memoirs of a Geisha meets Eleanor and Park. Fictional story that promotes the idea of Americans getting in touch with their history and beautifully shows the history of Okinawa even prior to its occupation by Japan and then America. What is family? What is love? How does a young girl know the path to take? How do we deal with loss? What place in our lives do our ancestors have? How does our country matter in our lives? These questions are all raised, as each character encounters life, family, love and country on a grand scale.

Note: it does start slowly with a dual time line of teen angst that is almost wearying. But then bam, it takes off so don't quit it. This is not just another YA pining offering.

I should preface this review by saying I lived in Okinawa for several years as a civilian(with the military) and as a student of Kubasaki HS.

I did not particularly like or bond with the American characters in the book(until the end) it’s like they were bad caricatures of American culture. It simply was not my experience at all, so a bit hard to swallow. I did, however, thoroughly enjoy how the Okinawans were portrayed. They were much more accurate in my opinion.

The book is very well researched and well written. I would still recommend reading this book as it is a great storyline.

The complex relationships of sisterhood are powerful influences in my life and Sarah Bird beautifully captures the many facets of those oft challenging interactions in this story of 2 pairs of sisters, linked by family, time and the tragedy of Okinawa's history. For me, it also redefines the idea of a ghost story - in the best possible transformation and delivered by a stellar cast.

As a writer, Sarah Bird has come of age with this well crafted and ambitious work. Though it starts off sounding like another YA coming of age story, Luz and Tamiko are characters worth knowing.

This is one I'll read again and again.

Sarah Bird writes in such an interesting way. She hits the right mixtures of descriptions that paint murals in your mind and interesting plots twists that in any other context would seem hokey. The characters leave indelible memories and when the story ends you miss them. Great Read!!!

Getting ready to visit Okinawa and Kadena. Can’t wait to find some of the places in the book.

Poignant story of suffering and transformation

Sarah Bird has written a sometimes heartbreaking, yet very moving story of the parallel lives of two teenaged girls living in Okinawa--separated in time, yet connected in surprising ways. The narration is very good--in that several people contribute to this to bring us more authentically into the atmosphere of the novel.

Tamiko is a young girl who has died of suicide at the height of the invasion by Americans during WWII, when Okinawa was surrendered. She tells her part of the story mostly from the perspective of what is happening at that time (leading to her death)--bringing the listener directly into strong family connections, the life on this island before the war, and contrasting it with the initial brave attempts to win the war--where even the youngest among them feels honored to be doing their part to help the Emperor. She is one of the Lily girls--recruited at first to be in school, but quickly shifted to horrifying experiences as these young girls are sent to be nurses to thewounded Japanese men. Now, her spirit is searching for someone to help her complete her journey to be with her beloved ancestors.

Luz is an American girl, whose mother is the head of the Kadena Air Force base police, and whose sister has been recently killed in Afghanistan. She, too, is desperately searching for meaning, and closure, after something has turned her world upside down. She also is struggling in the beginning with wishes to die, to rejoin her sister in the only way she can think of. She is adrift in her efforts--feeling lack of closeness to her mother or anyone else. Newly moved to the base, she doesn't even initially have close friends to help her with this.

Their two stories begin to combine in surprising ways (which it would be a spoiler to comment more on). The strength of this novel lies, I think, in two places. Bird is excellent at evoking the atmosphere, the sense of what people are feeling, reacting to--their levels of joy (at times) and desperation at others, and how connections with others brings courage to face what must be faced.

The other thing she has done, is provide a wealth of information about how the Okinawans relied on their connection with the "kami" (or spirits of ancestors) to find strength, and the need to return to their ancestral place among them. The story provides a gripping sense of what it must have been like to helplessly face the disaster of your entire world about to come to a catastrophic end and yet continuing on, always treasuring Life. The book is beautifully written and filled with fascinating details about life on Okinawa (past and present).

Much of this book addresses the suffering of the main characters, yet I didn't feel pulled down by it--actually the opposite, it was more inspiring and deeply engaging. I have not read Sarah Bird's previous books, but now I think I will seek them out.

What can I say….poor story, good narration.

I think a lot of the cussing and drug and alcohol using I would have left out but then there would have been little to say.

Has Above the East China Sea turned you off from other books in this genre?

Not necessarily. There was some good in the book. As impossible as it seemed, the nursing pin was, in the end, returned to the sister.

I have not listened to this narrator's other performances. I would like to know if Tandy Cronyn was related to Jessica Tandy and Hume Cronyn?

Was Above the East China Sea worth the listening time?