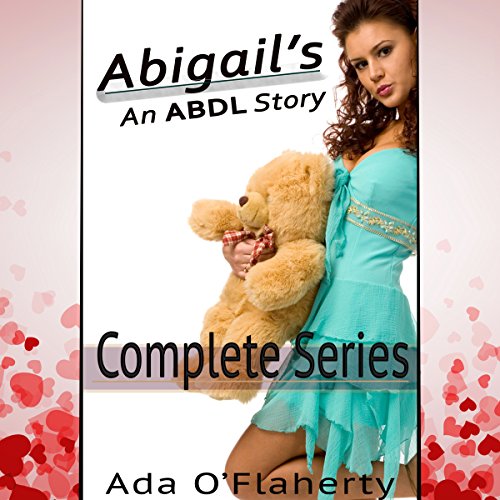 The words had chilled Cole when he'd heard the young Abigail utter them, her teeth chattering as she recovered from exposure to below-freezing temperatures. With her mangled bicycle in the back of his truck, Cole had taken on more than he had ever dreamed when he'd stopped to help the lost and lonely 19-year-old. Her teddy bear peeking out from her backpack paired with the thickly padded diaper she wore beneath her short skirt told him everything he needed to know to make his heart long to make her his.

In between those moments, Cole takes care of his sweet little Abigail in all the special ways he knows how. He makes sure her tummy is full of good, wholesome food; helps with bathtime; and gives his sweet little Abigail a red-bottomed, tearful correction when she throws a very naughty tantrum. On top of all that, he helps Abigail learn about her own body and the pleasures he can give her.

Part 3: Someone's gonna have a "first time", but it's not Abigail.

With the things that Paul has been doing to him, Cole is suffering a crisis of identity. He hates Paul for making him want him - but he still wants him. And by the end of part 3, Cole's going to have him.

Taking Cole for the first time is hard on the innocent Abigail. It's hard on Paul watching her take him. Cole wasn't built for a girl's first time. He's too big, and Abigail's just a little with a cute, thick padded diaper.

In Abigail 4, the happy conclusion of the Abigail series, the three would-be lovers battle with their wills and their hearts, each doing their best not to be left behind by the others.

What listeners say about Abigail's: An ABDL Story, Complete Series

overall a great book. lots of twists & a several kinks. It went fast & I was sad when it ended. I'll probably listen to it again.

if you dont want insest this is not the book 4u

I hate that it looks like a story of a daddy and his little girl but its not just her you have her step brother who was her old daddy that has sex with her new daddy later in the story then i skipped two chapters not it sounds like the step brother and sister are dating what the fuck this book sucks.

What a great ABDL story. I love ABDL boy stories but this one got me.
This was a story well written and told.
The narration with this story was perfect.