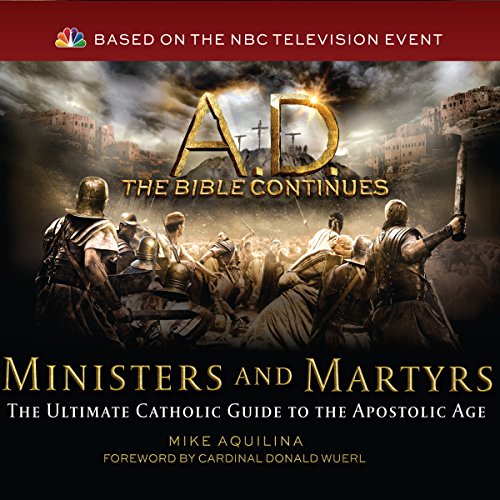 By: Mike Aquilina
Narrated by: Kevin Archer
Try for $0.00

Based on the epic television series A.D. Ministers and Martyrs, this audiobook offers an unflinching look at the lives and sacrifices of those first Christians who were given the task of spreading the Gospel to the ends of the Earth.

Relying on the latest archaeological findings and scientific research, acclaimed author Mike Aquilina takes you on a journey through the Apostolic Age, bringing to life the dusty streets and oriental smells that would have accompanied Mary and the apostles as they built a Church that lasts even to our day.

You'll also come to know the beliefs of the early Christians, what they taught about the Eucharist and the divinity of Christ, how their church services resemble today's Mass, and how Rome became the spiritual center for Christianity.

Read these pagesand you'll come to see that despite the best efforts of their enemies, the blood of the apostles did not snuff out the faith but brought forth great saints whose holy deeds and brave examples gave the besieged Church a vigor that lasts even to today.

Ministers and Martyrs will give your confidence that the Church is indeed Christ acting in the world and that no matter how ruthless her opponents, she will endure to the end of time.

What listeners say about A.D. The Bible Continues: Ministers & Martyrs