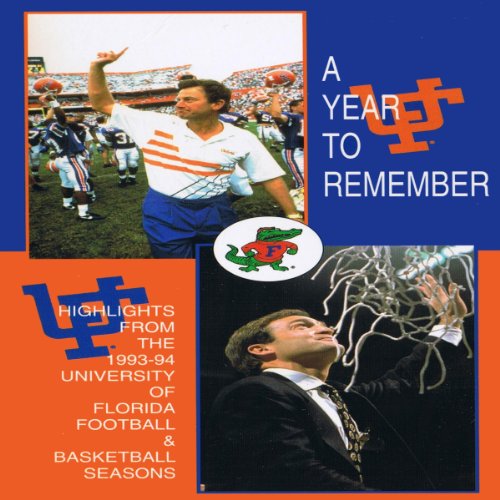 A Year to Remember

Join Mick Hubert, voice of the Gators, as he relives through radio highlights the 1993-1994 Gator football and basketball seasons - a year which saw the University of Florida climb to the top of collegiate athletic programs! Capturing a second consecutive SEC Eastern Division title, the Florida Gators avenged a loss to Alabama the year before by beating the Crimson Tide in the SEC Championship game and earning a berth in the Sugar Bowl. Along the way, the Gators scored more points, totaled more yards and passed for more touchdowns than any team in conference history. Against undefeated West Virginia, the Gators rolled to a 41-7 Sugar Bowl win, for a school-record eleventh victory and a #5 ranking in the final AP poll. The Florida basketball team began the 1993-1994 season largely unheralded, but shocking critics and fans alike, marched to victory after victory leaving in their wake major powers Kentucky, Texas, and Oklahoma State. On their way to a school-record 29 victories, the Gators became SEC Eastern Division Co-Champions, SEC Tournament runner-ups and ranked 14th in the final AP poll. Seeded a #3 in the NCAA Tournament, Florida defeated James Madison and Pennsylvania, stunned UConn and rallied against Boston College to capture the East Regional title. They had, in fact, "found a way" to the Final Four. It was a year to remember!

What listeners say about A Year to Remember