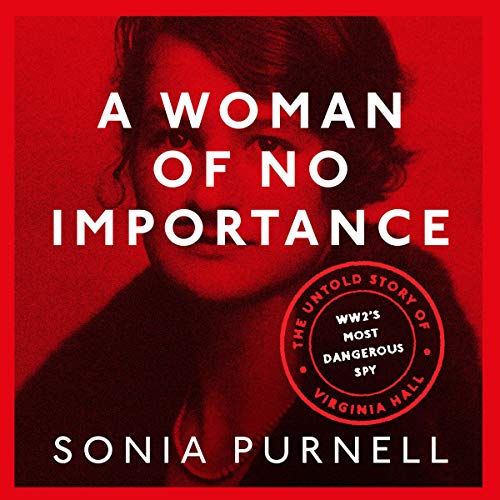 A Woman of No Importance

By: Sonia Purnell
Narrated by: Juliet Stevenson
Try for $0.00

The incredible true and untold story of Virginia Hall, an American woman with a wooden leg who infiltrated Occupied France for the SOE and became the Gestapo's most wanted Allied spy, by acclaimed biographer Sonia Purnell.

The remarkable double life of an American-turned-British spy, Virginia Hall, a 'bolshie' woman from Maryland who, determined to overcome a physical disability that threatened to define her life, successfully infiltrated Vichy France for England's SOE before America's entry into WWII and then, three years later, for the SOS, providing crucial intelligence and logistics for the mounting French Resistance and, later, Allied troops.

This is a compelling and inspiring tale of resistance, heroism, spycraft and overcoming prejudice, based on brand-new and extensive research, for anyone who loves reading Ben Macintyre, Rick Stroud's Lonely Courage or Sarah Helm's A Life in Secrets.

What listeners say about A Woman of No Importance

I was familiar with Virginia Hall ( & Noor Kahn) having read Sarah Helm's book "A Life in Secrets: Vera Atkins and the Missing Agents of WWII" in 2016.

I enjoyed getting to hear a much fuller account of her courage during WW11, and then her life after the war. To have given so much during the war and then to be side-lined afterwards must have been so hard .... and to have your mother not give her O.K. for you to marry the man you've been living together with off-and-on for years, until you're in your fifties.

This is the kind of book that encourages me to want to do more study about the character.

Outstanding story of a remarkable woman

One of the most riveting and remarkable stories of courage and ingenuity in the face of incredible adversity.
Virginia Hall was a truly astonishing woman whose accomplishments put legions of her contemporary Male
collaborators and bosses to shame. She deserves to be celebrated and I volunteer to make a statue to commemorate her.I will ,listen to this book again and again for inspiration.
Since writing g the above review I have listened to this twice more.It is an amazing story that is very well written and beautifully read.It is the best audio book in my collection and believe me I have many hundreds.

Virginia Hall was an amazing woman, an effective and trailblazing SOE operative. Deapite being ruthlessly hunted by the German authorities continued to evade them all whilst organising effective networks and sabotage raids. Her work in Lyon turned her to the go to problem solver of many allied operatives, often compromising her own safety she helped them in whatever way possible. Often facing discrimination from top brass and resistance operatives on the ground due to being a woman but she was indefatigable.
At one point Virginia was forced to escape France via the Pyrenees when the Nazis seized the free zone. This would have been a feat of endurance for anyone let alone someone who had lost one of their legs.
As with most true hero’s Virginia was never given the respect or opportunities she deserved and had indeed earned after the war.
The book is very well written, much better than other books I have listened to. Highly recommend

After having read quite flattering reviews of this book I was eager to begin listening. It didn't take long, though, before I lost interest. Over and over again I caught myself thinking of other things while listening. The narrator probably did her best but there was no "drama", merely a dry account of the main character's activities. As I have read a lot about wartime France and the resistance, I had hoped for a colourful and captivating story, but this reminded me of a school essay - talented but boring..

Brilliantly told, brilliantly read. The scale of Virginia Hall’s achievement is remarkable and the book is biography, history and thriller all at once.

superb from start to finish .

Will live long in the memory. outstanding. led a life to the full . Thank you.

A truly extraordinary and inspiring woman but her story is utterly heartbreaking, devastating and infuriating. Very well written and read.

A true female hero if ever there was one

A really interesting and eye opening read about a truly remarkable woman who's accomplishments should be more widely known about, forget the vacuous Kardashians, this is a woman that we should encourage our children to aspire to be like; brave, strong and resolute.
Narration is good ( French accent a bit clichéd at times and the American a bit naff but not detracting from the story in the slightest) A really good read.

Put it on the National Curriculum

A disabled woman, who created and lead the Resistance in two regions of France, showing incredible courage and planming skills.

A wonderful listen. I had to keep on reminding myself all this was true and not just a story.

Gripping, what a brave woman

Kept my attention from start to finish, how brave where all these people, As usual an awful lot of lives were lost do to the incompetence of people in high office, one of the best ZI have listened to and brilliantly narrated.

A remarkable story, a 'must' read executed brilliantly by Juliet Stevenson. Unbelievable but sadly believable.

Exhaustively researched, engagingly written. Better than the best spy novel because it's true and about an unsung hero, a superwoman who was fearless, clever, and disabled.