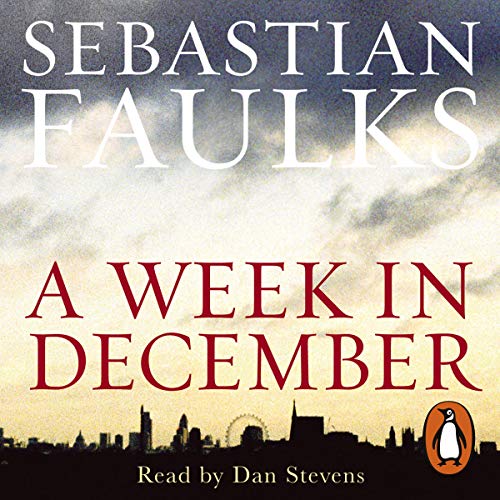 A Week in December

By: Sebastian Faulks
Narrated by: Dan Stevens
Try for $0.00

A Week in December is Sebastian Faulks's first wholly contemporary novel. Set in London, it's a brilliant social satire, structured like a thriller, that takes place over the course of a single week at the end of 2007.

It brings together an intriguing cast of characters, each apparently in his or her own world but - as gradually becomes clear - ultimately intricately related. The anti-hero, John Veals, is a shadily successful and boundlessly ambitious Dickensian figure who is trading billions, and other characters include a teenage Muslim fanatic, a Polish footballer, a female tube driver, a literary critic, a care worker, and a chutney tycoon.

As the story builds to its climax, Faulks pulls together powerful ideas about family, money, religion, and the way we live now.

"During times of momentous change, men of letters are driven to produce works that fictionalise the state of the nation, linking individuals with historic events. The 19th century gave us Thakeray�s Vanity Fair, Dicken�s Our Mutual Friend and Trollope�s The Way We Live Now; the 21st has given us Sebastian Faulks�s A Week in December. It takes broad shoulders to carry the weight of, if not the nation�s expectations, then certainly those of a beleaguered book industry crying out for an epic novel that holds up a mirror to our broken times. Faulks�s manly shoulders do not disappoint."( The Times)

"His book could not be more topical or bang up to date. Greed, corruption and hubris are the defining traits of our age and Faulks holds a mirror up to our drug-addled, money-obsessed society. The novel is full of Russian babes, venal politicians and bank fraudsters. What more could any reader want? Eat your heart out Charles Dickens."(The Tatler)

"... Faulks knows the book world and satirises it with brio... A compelling tale of contemporary London."(The Observer)

"A portrayal of modern London that is both richly entertaining and highly rewarding. Faulks has come as close as anyone to completing the jigsaw that is this crazy, fascinating city of ours."(The Evening Standard)

"Sebastian Faulks�s ambitious new novel could hardly be more timely, since it takes as one of its principal narrative threads the imminent collapse of a bank that will have to be bailed out by the government... It is to Faulks�s credit that he both wrong-foots us and keeps up the narrative tension until the very end..."(The Sunday Times)

What listeners say about A Week in December

Enjoyed the well created characters and their thoughts and feelings. And not the least how they cross each others lives, very clever.
Noticed too late that I had gotten the abridged version and saw the original wasn't available. Can't stop wondering how that would have been though and what they have cut out.

thoroughly griping characters and as expected exceptional writing. Stevens is a master class in narration.

It has taken me so long to read/listen to this book...why did it take so long? Every word is gripping as the lives of the characters unfold.
Don’t delay, listen to an excellent story.