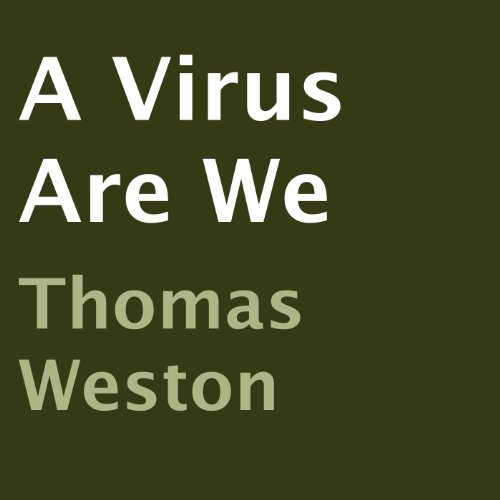 When Jason was released from the mental hospital he became convinced that the peoples of the world are a destructive virus that must be eliminated to save the Earth. This was confirmed to him by the voices and visions that flooded his brain. With the help of an evil mentally disturbed doctor who has developed a deadly virus and a disgruntled female cyber-warfare department programmer, they set out to wipe out what they consider to be the human virus. As a pandemic ensues and electrical power fails, millions die around the world and the human species appears to be doomed. A chilling science fiction novel from the pen of Thomas Weston.

What made the experience of listening to A Virus Are We the most enjoyable?

The narrator is so droll in his interpretation of the main character!I love it!

He is great!This is the second or third book of 'his' that I've listened to and he's always got the people down to a sneering t!

Of COURSE.I'm the chosen 1

This book is so darkly funny!I enjoyed every minute of it.The characters could have been a bit more fleshed out so we would know WHY they want what they want,but all in all it's great.Having such a great narrator really adds to the story!