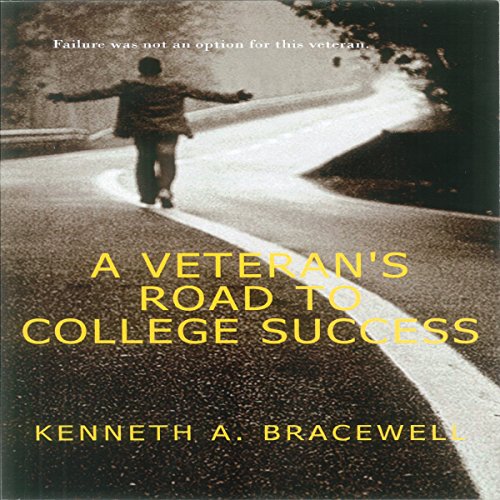 A Veteran's Road to College Success

By: Kenneth A. Bracewell
Narrated by: Andre Hughes
Length: 1 hr and 41 mins
Categories: Self Development, Motivation & Inspiration
4.5 out of 5 stars 4.5 (6 ratings)

A Veteran's Road to College Success

By: Kenneth A. Bracewell
Narrated by: Andre Hughes

Meet Kenneth Bracewell, a veteran who does not allow failure to be an option in his life regardless of the situation or environment he is in. A Veteran's Road to College Success is a story of conviction through society and service to others. During his senior year of high school, Kenneth's counselor told him that he was not bright enough to be a soldier in the United States Army. The negative comment meant nothing for the young man, who became an infantry soldier one year after the event took place. A unique inspirational story about an army infantry soldier leaving the service and entering college after returning back from Operation Iraqi Freedom. Kenneth shares with college students, veterans, military personnel, and everyone the story of how he earned two separate undergraduate degrees (associate's and bachelor's) in three years despite the stress and constant struggle that occurred in this challenging process with the post-9/11 GI Bill and life after combat. Returning from the Iraq War as an infantry soldier was enough for this young man. Regardless of the many setbacks and failures of being unemployed, the veteran remained on his own two feet and finished strong so he could provide for his family.

I don't listen to a whole ton of audiobooks, but this one definitely caught my attention. I felt that in just less than two hours, the author was able to inspire his listeners while keeping their attention all the way through. One of the best things I got out of listening to this book is that you really can do what you want to do if you set your heart to it. Kenneth Bracewell really shows us that in his story; it is incredibly motivating and inspiring to hear his story, from serving in the US Army to succeeding in college and life despite all the challenges and setbacks that he faced. My favorite thing about this audiobook is probably the fact that the author really spoke to us like we were his friends. It was very down to earth, honest, and I really enjoyed the listen.

Would you listen to A Veteran's Road to College Success again? Why?

Yes, it has so many inspiring ideas

What does Andre Hughes bring to the story that you wouldn’t experience if you just read the book?

He has a wonderful voice and kept my attention.

Yes, and it is the perfect length and yet gives a wealth of information.

This was a great motvation for me and I was reminded of the sacrifices of all veterans and service men and women. This inspired me to go forward with my decision to start college and gave me all the advice and encouragement to do it sucessfully.Kenneth shared his heart and soul in this and I applaud his passion and respect for everyone.I highly recommend it.

This was truly a great inspiring novel! Its a testament to what we are all capable of and the fortitude of the human soul. Hearing about the obstacles that Kenneth Bracewell faced was quite emotional, it really makes one reexamine their life. I quite loved the insights into Operation Iraqi Freedom, as well. Overall, I highly recommend!

This is a great story of dedication, discipline and intestinal fortitude to accomplish a mission and never quit! This remarkable story should be the standard bearer for all academic institutions to model towards their students. This is a fantastic read (audio) and thoroughly recommend it to everyone that are pursuing educational endeavors.

If you could sum up A Veteran's Road to College Success in three words, what would they be?

This book was well written and easy for me to understanding. It has inspired me to plan on going back to college this summer after I did not finish long years ago. I would highly recommend this book to anyone. Just thanks to author and related of the member for this great book also it can change your life.

What was one of the most memorable moments of A Veteran's Road to College Success?

Which character – as performed by Andre Hughes – was your favorite?

All character is awesome.