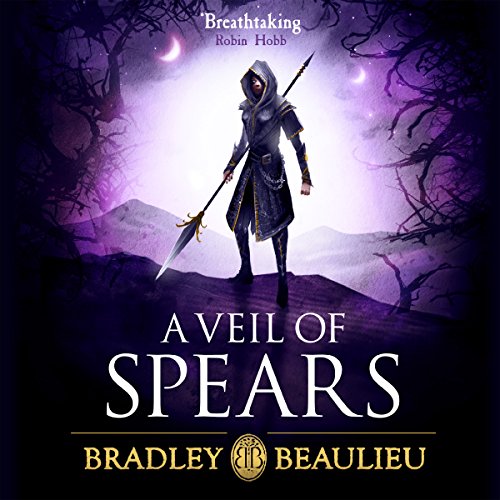 A Veil of Spears

By: Bradley Beaulieu
Narrated by: Sarah Coomes
Try for $0.00

The Night of Endless Swords nearly saw the destruction of Sharakhai, and since then the Kings have come down hard on the rebellious Moonless Host. Hundreds have been murdered or given to the Confessor King for questioning. Hundreds more have fled. Including Çeda, who has discovered that Onur, the King of Sloth, has returned to the desert to raise an army and challenge the remaining kings.

The Moonless Host - who have taken to calling themselves the Thirteenth Tribe - will be trapped between Onur's growing influence and the considerable might of the kings who, with Sharakhai firmly back under their rule, are turning their attention to the desert once more.

Çeda knows that the asirim are the key. If she can lift their curse and free them from their bondage, then they can save Thirteenth Tribe from the squabbling kings...and perhaps the kings themselves are no longer as unified as they once were. As they vie against each other for control of the city, could Çeda make an ally of one of them? And which one, when any of them could betray her as easily as they would their fellow kings?

Whatever the solution, the end is coming: as Çeda focuses on freeing the asirim and weakening the kings' hold on Sharakhai, the kings' forces, the scheming queen of Qaimir, Hamzakiir the ruthless blood mage and the Thirteenth Tribe all prepare for a grand clash that may decide the fate of all who sail the desert.

What listeners say about A Veil of Spears

I loved the book but was hard work learning about the different King characters, they all seemed to have the same names. At the end of book 3, I still don't know who the king characters are and this definitely took from my employment; it was hard blood work!

love this book. Can't wait for the next. best of the three so far. keeps you hooked like a good book should.

Great as usual but starting to drag...

I enjoyed the continuing story but as the author seeks to maintain intrigue and mystery and introduce ingenious twists and turns, there are some characters (like under undisclosed siblings) and storylines that seem unnecessary and even somewhat desperate.....I worry that it’s becoming one of those series where the author is looking to stretch the series as long as possible and add as many side stories to ensure volume in each title.... It’s a pity and as a result, this 3rd instalment is not as good as book two and way below the standard of book one... Hope the author can wrap up the story/series in the next book to the higher standard achieved in the first two books!!