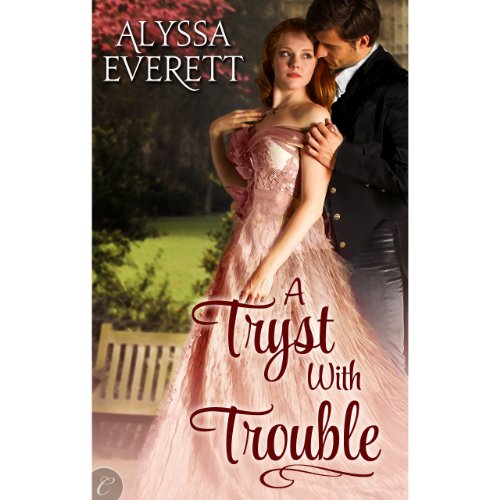 A Tryst with Trouble

By: Alyssa Everett
Narrated by: Lizzie Owensby
Try for $0.00

London, 1820: Lady Barbara Jeffords is certain her little sister didn't murder the footman, no matter how it looks...and no matter what the Marquess of Beningbrough - Ben - might say. She can scarcely help it if his cousin is the only other suspect. In fact, she wants nothing to do with ruggedly handsome Ben; he reminds her of all the insensitive clods who passed her over.

For years Ben has been dogged by painful gossip about his father's rumored homosexuality. His gruff shell hides a passionate nature, and he's also fiercely loyal - which is why he'll never let the clever and beguiling Lady Barbara pin a murder on his cousin.

Sparks fly as the two compete to defend their loved ones. But as strange new clues emerge that neither can decipher alone, they have no choice but to compare notes and sleuth in tandem. A tenuous bond develops that soon faces its toughest challenge when Ben himself becomes a suspect.

What listeners say about A Tryst with Trouble

Excellent combination of mystery and romance

A Tryst With Trouble is written with impressive competence and a feel for Regency-era language. Lizzie Owensby does an excellent job of narrating.

It is written in first-person, alternating between the Marquess of Beningbrough ("Ben") and Lady Barbara Jeffords, who begin as antagonists and end up as a pair of sleuths trying to solve a murder in which both his cousin Teddy and her sister Helen are suspects.

I'm not a big fan of first-person, but it does offer a talented author the chance to set up clever he said/she heard moments. For example:


[Barbara] His drowsy gaze was roaming over me, those gray eyes traveling past my face and down my evening gown of slate georgette. It might have been flattering if I hadn’t known he disliked me, and if he hadn’t just admitted to checking his cousin for blood. Now it appeared he was doing the same to me. . . . He realized I’d caught him studying me and looked away. “It wasn’t Teddy,” he said, his voice curiously husky.
* * *
[Ben] What was I doing? Losing my train of thought, deep in contemplation of Lady Barbara Jeffords’ breasts. . . . And she caught me staring. Good Lord, I couldn’t even remember what she’d been saying. So I just mumbled, “It wasn’t Teddy,” which, thank God, seemed to satisfy her.


As their investigation continues, the couple becomes more trustful of one another and more tempted by mutual lust. There is also an interesting backstory about Ben's father, the Duke of Ormesby, who is widely believed to be a homosexual despite his long-time marriage to Ben's mother. Ever since Ben learned about this, from taunting boys at school, he has resented his father for using his mother and for exposing his only son to such hurtful rumors. As the story progresses, Ben comes to understand and appreciate both of his parents, but it would be a spoiler to explain how that happens.

If I have any criticism of the book, it is because the story is more mystery than romance. It's a smoothly done mystery, however, which many romance authors are unable to pull off.

couldn't put it down

great who done it book, even though I knew who did it almost from the beginning, it didn't seem to matter. great narration, great story, you will enjoy it.

A Tryst with Trouble

A very good book, fast pace and amusing. I liked the sparring H/H and the mystery. Good to touch on prejudices as well. This is my first read for the author and I look forward to the next. The narrator did a very good job.

The main character Barbara is the dumbest, most dense person. She literally cannot see anything outside of her thought and believes nothing else.
The love between her and the marquees is unbelievable how fast it turns from we will never marry anyone or love to I cannot live without you.
Performance was decent for the women but she did the weirdest voice for the male

Would you consider the audio edition of A Tryst with Trouble to be better than the print version?

Equal. This story is written in first person POV. Therefore, the POV switches between the hero and the heroine, which requires some patience with listening or reading. I say endure because it's a good rainy day type of novel.

The narrator was very good. Although, I wish the narrator's male voice was a little deeper. There are times when it's difficult to distinguish when the hero is speaking.

Which character – as performed by Lizzie Owensby – was your favorite?

I read for entertainment and I felt this story held my attention. I felt the author did try to put somes twist in the story but it is easy to pen point the villian.

A sexy HR who dunnit you won't want to miss!

Lady Barbara is tall, red haired and buxom -- an amazon compared to her delicate, blonde, blue-eyed sister Helen. Convinced she is firmly nailed to the shelf, Barbara gives up hope of ever being married when she discovers that Lord Clibbington, a man whom she thought was courting her, was actually pursuing Helen. Hurt and a little jaded, Barbara has decided that no man will ever want her.

Enter the Marquess of Beningbrough, or Ben, a handsome heir to a dukedom, with deep seated issues of low self-esteem, and a big chip on his shoulder.

Ben and Barbara meet each other for the first time over the body of a dead footman. Initially hostile, they each have an interest in finding the culprit, and are soon forced to work together to unmask the killer. She finds him arrogant, while he thinks she's a shrew. They are both so damaged and thin skinned that communication is nearly impossible. The story really takes off when they begin to trust one another -- and their growing, mutual attraction.

It's important to note that the bickering back and forth between B & B is handled with a master's touch, as Everette deftly skirts the abyss of going overboard. She kept to the right side of witty and believable, and I found that very impressive. Too often, this kind of thing is laid on too thick, and can ruin an otherwise good book.

The plot is fast paced and filled with menace -- black mail, murder and murder attempts. It also has some sexy clinches in the drawing room, and a sweet, dawning romance that is very well done.

In particular, Ben's unusual -- for the times-- family drama was handled beautifully. Also Helen is an interesting character when her flaws are laid bare.

I would love it if this was the first in a series, as I'd enjoy watching Ben and Barbara solve more mysteries. Unfortunately, this is not the case. Nevertheless, this stand alone book held my attention throughout -- so much so, that I woke up early today and had to put my earbuds in and finish the book, before I even got out of bed! That's something that has NEVER happened to me before!

I enjoyed this one very much, and even though it's fairly obvious 2/3d's in, who the killer is, you won't mind. You'll be hanging onto your seat until the end, and that's pretty great for a HR!

This is my first Alyssa Everette novel, but I've since bought two more.

The reader, Lizzie Owensby, is a revelation, and she did an amazing job. I'll be looking for more books read by her.

Also, a shout out to Lady W for the great review. She's the reason I took a chance on this. Thanks Lady W!