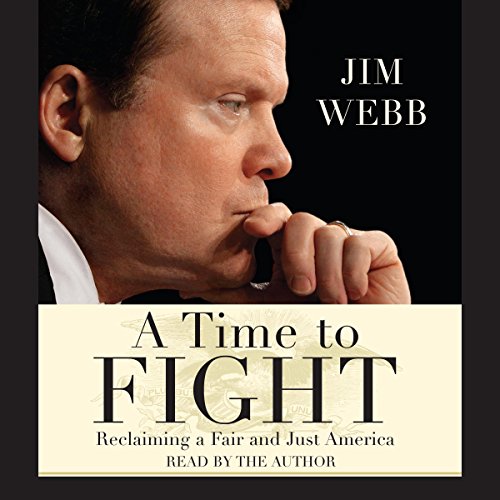 A Time to Fight

"I'm the only person in the history of Virginia elected to statewide office with a Union card, two Purple Hearts, and three tattoos."

Jim Webb - the best-selling author and now the celebrated, outspoken U.S. senator from Virginia - presents a clear-eyed, hard-hitting plan of attack for putting government to work for the people, rather than special interests, and for restoring the country's standing around the world.

Infused with the intelligence, force, and firebrand style that has earned Senator Jim Webb enormous national attention from his earliest days in office, A Time to Fight offers a thorough and provocative assessment of the thorniest issues Americans face today, along with cogent solutions drawn from Webb's lifetime of experience as a much-decorated Marine; a widely traveled, award-winning journalist and novelist; a highly placed member of the Reagan administration; a senator with a son who fought as a Marine in Iraq; and, perhaps most important, a proud scion of America's vast but frequently ignored working class.

Through vivid personal narratives of the struggles members of his family faced, and citing the courageous actions of presidents ranging from Andrew Jackson to Teddy Roosevelt to Dwight Eisenhower, A Time to Fight provides specific, viable ideas for restoring fairness to our economic system, correcting the direction of national security efforts, ending America's military occupation of Iraq, and developing greater government accountability.

Webb brings a fresh perspective to political dynamics that have shaped our country. His stirring, populist manifesto calls upon voters to make the choices that will change America for the better.

What listeners say about A Time to Fight