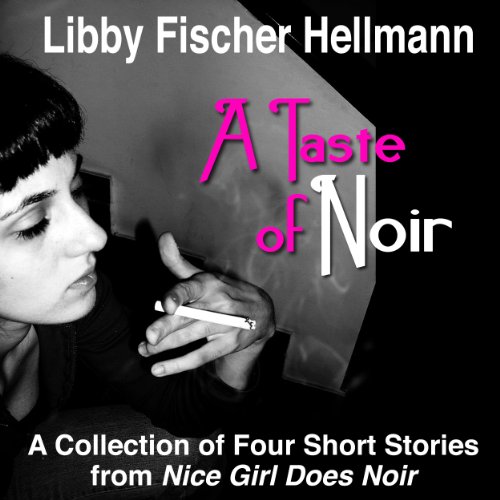 A Taste of Noir

A Taste of Noir includes four short stories from the collection Nice Girl Does Noir by Libby Fischer Hellmann. The stories in Taste include:

This story, about a hit woman who takes out the wrong mark, was originally written for the These Guns for Hire (Bleak House, 2007) anthology and was one of Libby's first “noir” stories.

What happens when an average Midwestern couple hits Vegas? This darkly humorous Keystone cops-like short story was written for the Murder in Vegas anthology (Forge, 2006) edited by Michael Connelly. It was subsequently nominated for both the Agatha and Anthony Awards for best short story.

In 1938 sixteen year old Jake Foreman spends his free time with his friend Barney Teitleman in Lawndale, a prosperous Jewish community on Chicago's near west side. Jake develops a crush on Miriam Hirsch, an actress in the Yiddish theater who lives at the Teitleman's boarding house, but Miriam only has eyes for Skull, who might or might not be a gangster. This award-winning short story was first published in 1999.

“The Murder of Katie Boyle”

Libby's series protagonists, video producer Ellie Foreman and PI Georgia Davis worked together in Doubleback (2009), but this story, originally published in 2009, explains how they originally met.

What listeners say about A Taste of Noir