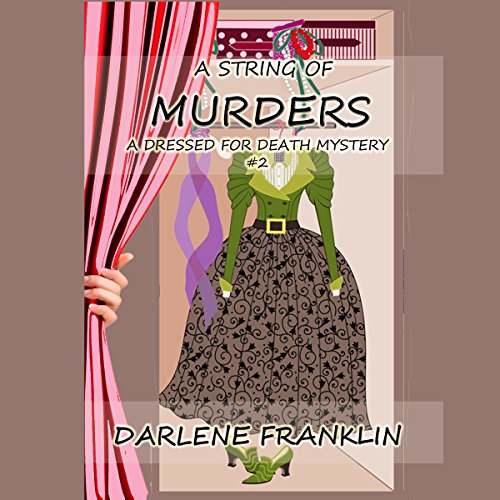 A String of Murders

By: Darlene Franklin
Narrated by: Jae Huff
Try for $0.00

Cici Wilde's fiancé, Audie Howe, calls her with disturbing news. Her store's been broken into and worse, someone murdered the intruder. The victim clutches a string of pearls in one hand and a threatening e-mail in the other. It reads "I know what you're doing. Meet me at Cici's Vintage Clothing at 8:30 p.m. Saturday night."

With the discovery of the body, a recent spate of ugly e-mails throughout the Grace Gulch community becomes intensely personal. The murderer purposely lured the victim to Cici's store. Why? The answer lies in the strand of pearls, a gift from arts patron Magda Grace Mallory. She has loaned them to Audie, director of the MGM Theater, for use in the upcoming production of Arsenic and Old Lace.

Evidence points to members of the close theater community. Is it Gene Mallory, Magda's ne'er-do-well son? Lauren Packer, Magda's lawyer? Peppi Lambert, Grace Gulch newcomer and good friend of Cici's sister? Or Suzanne Jay, theater diva with a shady past? When a second murder is committed with the same string of pearls, Cici battles through baffling clues to find the killer before he strikes again.

What listeners say about A String of Murders

The second in the Dressed for Death series is clean, cozy and a lot of fun . . . the little town of Grace Gulch, Oklahoma is preparing for the theater production of Arsenic and Old Lace, when someone breaks in to Cici Wilde's vintage clothing store . . . and is murdered . . . Cici, as always is a spirited gal, and cannot help but to write down a list of suspects . . . which, by the way, includes her fiance, Audie Howe . . . and at the center of the crime is the string of pearls owned by Magna Grace Mallory . . . I am liking this series more and more . . . I find it interesting, entertaining and a refreshing break from heavier books . . . the shared faith and belief in Jesus Christ of the main characters is important to me . . . and I am vested in Cici and Audie's spiritual walk as they begin their life together . . . going to get the next in the series . . .