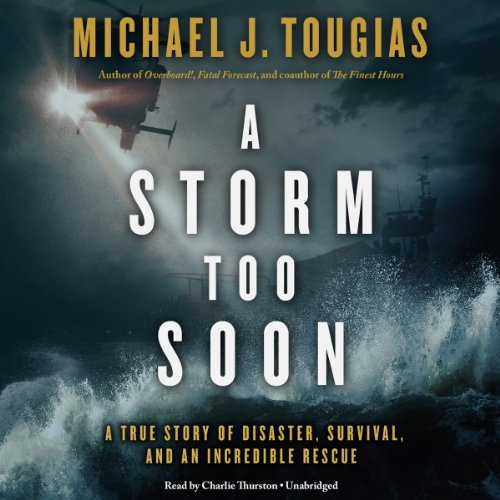 A Storm Too Soon

By: Michael J. Tougias
Narrated by: Charlie Thurston
Try for $0.00

A heart-stopping true-life tale of maritime disaster,survival, and daring rescue from a master storyteller.

Seventy-foot waves batter a torn life raft 250 miles out tosea in one of the world's most dangerous places, the Gulf Stream. Hanging on to the raft are three men, a Canadian, a Brit, and their captain, Jean Pierre de Lutz, a dual citizen of America and France. Their capsized forty-seven-foot sailboat has filled with water and disappeared below the tempestuous sea. The giant waves repeatedly toss the men out of their tiny vessel, and JP, with ninebroken ribs, is hypothermic and on the verge of death. The captain, however, is a remarkably tough character, having survived a brutal boyhood, and now he must rely on the same inner strength to outlast the storm.

Trying to reach these survivors before it's too late are four brave coast guardsmen battling hurricane - force winds in their Jayhawk helicopter. They know the waves will be extreme, but when they arrive they are astounded to find that the monstrous seas have waves reaching eighty feet.

Lowering the wind-whipped helicopter to drop a rescue swimmer into such chaos will be extremely dangerous. The pilots wonder if they have a realistic chance of saving the sailors clinging to the broken life raft and if they will be able to even retrieve their own rescue swimmer from the towering seas. Once they commit to the rescue, they find themselves in almost as much trouble as the survivors, facing one life-and-death moment after the next.

Also caught in the storm are three other boats, each one ina Mayday situation. Of the ten people on these boats, only six will ever see land again.

Spellbinding, harrowing, and meticulously researched, A Storm Too Soon is a vivid account of the powerful collision between the forces of nature and the human will to survive. Author Michael J. Tougias, known for his fast-paced writing style and character-driven stories, tells this true saga in the present tense to give the reader a thrilling, edge-of-your-seat immediacy. A Storm Too Soon is Tougias at his masterful best and a heart-pounding narrative of survival, the power of the human spirit, and one of the most incredible rescues ever attempted.

What listeners say about A Storm Too Soon

I did enjoy the the story of A storm to soon. But, the narrator was the worst of any book I have listened too on audible. He sounded like a computer.

The narrator is so monotone it’s depressing. He is a nice clear voice but zero emotion.

I really enjoy Mr. Tougias' writing style, which is descriptive without being wordy or drawing attention to itself. The story itself is incredibly gripping and interesting.

The narrator is horrible and I nearly stopped listening multiple times. I've listened to a lot of books on Audible, and this was the worst narration I've encountered thus far. Words and names are constantly mispronounced. The pace is very slow with frequent unnecessary pauses. But most annoyingly the narrator over pronounces every word, making it sound like he's reading to a class of 5 year olds instead of an adult.

If you're able to, skip this one on Audible and just read the book instead.

Having spent some four years of my life in the United States Coast Guard, I have to say this book made me feel proud of the men that risked all and did their jobs so very well. This book keeps you turning the pages and is a true testament to absolute courage in the face of real adversity.