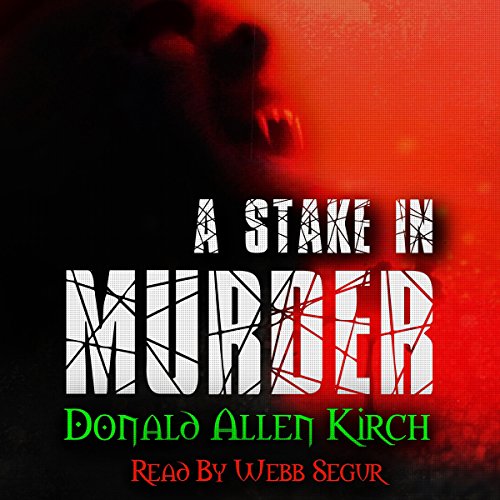 A Stake in Murder

By: Donald Allen Kirch
Narrated by: Webb Segur
Try for $0.00

There are monsters in the world.

Captain Darren Matheson, of the LAPD Homicide Division was a pleasant enough fellow. But when the FBI uses him to track down news reporter Sebastian Hemlock as a "special investigator", he understandably is curious. Hemlock, learning that he had failed with his original killing of an undead creature, seeks a chance to redeem his integrity, as well as gaining back the woman he once loved. Captain Matheson thought of the whole case as nothing but a waste of time. He had a murderer to catch.

Sebastian Hemlock had once been a respected news reporter. "Mister News" is what they used to call him. If there was a story to be found out, he usually was the one who uncovered it. That was until Phoenix, Arizona.

In 1991, the police were working on a series of murders. The victims were all drained of blood, the officials were not talking, and Hemlock soon discovered why. The killer was a vampire! With only his FBI friend to assist, the reporter went ahead, investigated, and tracked down the killer to destroy it.

After the vampire was laid to rest, Hemlock was shamed, fired, and couldn't get a job anywhere. His best friend turned on him, his girl left, and he was reduced to a tabloid job in Kansas City, Missouri.

We tell our children that there are no such things as monsters. We comfort them with the knowledge that we will always be there to protect them. What happens when we are proven wrong?

What listeners say about A Stake in Murder