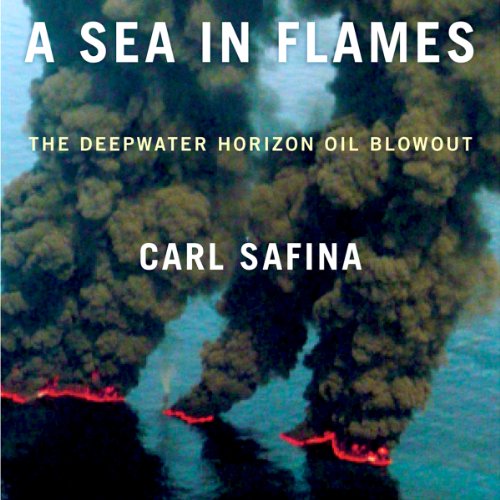 A Sea in Flames

A Sea in Flames

Carl Safina has been hailed as one of the top 100 conservationists of the 20th century (Audubon Magazine) and A Sea in Flames is his blistering account of the months-long manmade disaster that tormented a region and mesmerized the nation. Traveling across the Gulf to make sense of an ever-changing story and its often-nonsensical twists, Safina expertly deconstructs the series of calamitous misjudgments that caused the Deepwater Horizon blowout, zeroes in on BP’s misstatements, evasions, and denials, reassesses his own reaction to the government’s crisis handling, and reviews the consequences of the leak - and what he considers the real problems, which the press largely overlooked.

Safina takes us deep inside the faulty thinking that caused the lethal explosion. We join him on aerial surveys across an oil-coated sea. We confront pelicans and other wildlife whose blue universe fades to black. Safina skewers the excuses and the silly jargon - such as "junk shot" and "top kill" - that made the tragedy feel like a comedy of horrors - and highlighted Big Oil’s appalling lack of preparedness for an event that was inevitable.

Based on extensive research and interviews with fishermen, coastal residents, biologists, and government officials, A Sea in Flames has some surprising answers on whether it was "Obama’s Katrina", whether the Coast Guard was as inept in its response as BP was misleading, and whether this worst unintended release of oil in history was really America’s worst ecological disaster. Impassioned, moving, and even sharply funny, A Sea in Flames is ultimately an indictment of America’s main addiction. Safina writes: "In the end, this is a chronicle of a summer of pain - and hope. Hope that the full potential of this catastrophe would not materialize, hope that the harm done would heal faster than feared, and hope that even if we didn’t suffer the absolutely worst - we’d still learn the big lesson here. We may have gotten two out of three. That’s not good enough. Because: there’ll be a next time."

1st half good, rest is opinionated BS. Author does nothing but state his opinion, and quotes from others that really knew nothing about the spill.