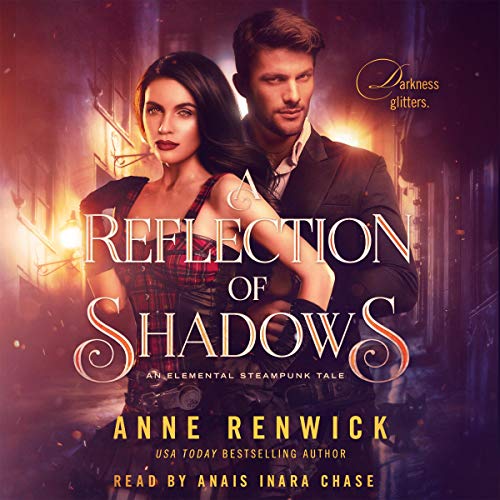 A Reflection of Shadows

By: Anne Renwick
Narrated by: Anais Inara Chase
Try for $0.00

A thief with golden eyes. The spy who loves her. A mad scientist who will break hearts to expose her secrets.

Shunned for her odd eyes and an unnerving habit of slipping into shadows, Lady Colleen Stewart refuses to be caged - should she decide to marry, it'll be for love and to a man of her choice. After all, she'd rather be racing over rooftops than waltzing across ballroom floors. So, when the only man to ever tempt her heart invites her on a covert mission, she leaps into danger.

Nicholas Torrington, queen's agent, is running out of time. While work has him chasing his tail, his sister grows increasingly ill, and Colleen, the woman he would make his bride, has acquired another, determined suitor. To coax his favorite thief back into his arms, he'll break every rule and lead her through the underbelly of London on a hunt for a mad scientist and a cure for his sister.

But the discovery of a burned-out laboratory provides more questions than answers, and they find themselves caught in a deadly game where they have become the prey. Surviving the ambitions of their pursuers will bring everything into sharp focus as they risk their very lives.

What listeners say about A Reflection of Shadows

This audiobook is so cool. If you want a spy and a thief running across foggy rooftops, dodging bullets, and solving a mystery, then this is the audiobook for you! The romance was satisfying as well. There were lots of plot twists. I also loved the intrepid couple, Lady Colleen Stewart and Nicholas Torrington. Nicholas was admirable and respectful of all women. He had his work cut out for him in wooing the unique Lady Colleen to become his wife at the same time as they both tried to stay alive and catch the villains.

Beware: there is some brief body horror that was rather revolting. It was definitely darker and more horrifying than the tiny bit in the author's “In Pursuit of Dragons”, but maybe it is about the same level as in “The Golden Spider”. In addition, some villains were cruel to cats. Regardless of these dark elements, I loved immersing my self in Anne Renwick's Steampunk Victorian world once again. There was a nail-biting mystery and simmering sexual tension. Love scenes were steamy and not too frequent. I adored the heroine's feline sidekick, too.

The narrator Anais Inara Chase did a wonderful job. Her smoothly elegant English accent elevated the story. I only wish that she pitched the hero's voice a little lower. Still, she is the right narrator for this original and unique Steampunk romance series that always includes some biological or medical science.