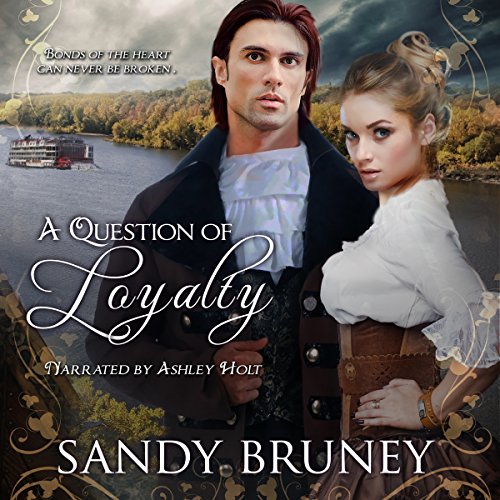 A Question of Loyalty

By: Sandy Bruney
Narrated by: Ashley Holt
Try for $0.00

When the border between Floriana and the United States is opened after 80 years, Nathan and Caroline visit as official tourists and unofficial spies. Escorted around picturesque turn-of-the-century New Orleans, they quickly realize they are being prevented from seeing the real city - and evidence of an incipient revolution.

After two assassination attempts, Nathan begins to question his loyalty to a king who may have deliberately placed them in harm's way. The pair are determined to find out who is trying to kill them and why.

A hurricane interrupts their search, and Nathan believes Caroline has drowned in the raging waters. Grief-stricken, he joins the revolution where he must face his deepest fears. Meanwhile, Caroline refuses to believe her rescuers when they tell her Nathan fell in the battle of New Orleans. Penniless and alone, she falls desperately ill.

For once, Nathan and Caroline's paranormal abilities fail to help. Will their love for each other be enough to reunite them?

What listeners say about A Question of Loyalty

Nathan and Caroline's adventures continue, this time as man and wife. This is Book 2 in the series and it is helpful to have read or listened to Book 1. The pair definitely has a knack for finding trouble and their latest exploits are even more action packed than the previous book. I'm really starting to love this series and can't wait to listen to the next installment. Ashley Holt's performance was well done and I liked the continuity of having the same narrator throughout the series. I enjoyed A Question of Loyalty and would recommend it.

Really enjoying this series! The narrator is fantastic and I love the storyline, alternate history and steampunk are a great combination. I received a review copy of this audiobook at my request and I have voluntarily left this review.

This is the first alternate history book I have ever listened to and I really enjoyed it. Unique story with interesting and well-developed characters. Great narration!

if a woman could wear trousers 😂😂❤❤

well what am I thinking about this book?
I started to listen to this, and the first line was absolutely hilarious.... it was a great book with it very nice story... the narrator is quite well as in the previous book of the series I'm very excited about the third book... and actually the thing I like the most in this particular book was the cynical parts that was attached to so many characters it's made me feel like all this specific century was full of cynical person this is so nice...

This was a very interesting story. It's about before the United States was joined. I enjoyed the story. The author and narrator did a great job.

Interesting, fun story with some twists

I really enjoyed this one! This is the 2nd book in this series, and continues on with the adventures of Caroline and Nathan. I'd recommend reading the first book, but I suppose it isn't completely necessary to enjoy this book. I listened to the story on Audible, and the narrator does an okay job. I also listened to the first book with the same narrator, and what I said in that review stands. Her voice fits the formal tone of this story. Solid narration. In this one, Caroline and Nathan are married, and are traveling to Floriana for their belated honeymoon. Nathan also has a bit of a spy mission for the king. The boarders have been opened, so the couple is excited to see and enjoy the local sites in Floriana, but there are some factors in play that put a damper on their vacation. There's lots of shady stuff going on, and Nathan and Caroline have landed in a bad spot. Be it people or mother nature these two are in danger. As mentioned in the premise, a hurricane causes quite the problem, and the two are separated. I was disappointed that Nathan only looked for 3 days before giving up looking for Caroline, that seemed like a very short time to me. He was distraught, so I get it a little bit, but Caroline didn't give up. I do enjoy the sweet romance between Caroline and Nathan, and they have a good connection. How they feel for each other is wonderful. The story is interesting and unique, and I like the bit of intrigue in the story. I don't usually like historical type stories, but this one is fun and the story has some twists. Looking forward to reading the next one!

Intrigue, Romance, and a Little Fantasy

I was voluntarily provided this free review copy audiobook by the author, narrator, or publisher.
I must admit that it took me a little time to get into this book. One of the problems I found was how the narrator used an unusual way of performing it. It got some used to it. I've also felt that it was a little rushed, both in the storyline and in the way it was read. Once I got over those two aspects however, I started enjoying the story, especially the twists supernatural powers seem to offer the otherwise very normal protagonists. Thanks to this, the normal becomes the interesting and I'm looking forward to listening to the other two books in the series.

We are getting to cross the boarders of the States, but there are dangers from people who still don't want the boarders open. This was a wonderful book, but I highly recommend that you pick up the first in the series before listening to this one. While there is some back history, the story picks up where the first book left off.

This is wher ethings get crazy

Book 2 in the series is action packed, and it makes me always wonder how any one person could have enough stamina to get through all these trials! Each book has an HEA, so not quite a cliffhanger, but you definitely need to listen to all 3 books.

I got this ARC via audiobook boom and this is my voluntary review. This series that tells of an alternate view of American history is very well developed. This time the couple are finally able to legally leave the country and their adventures or misadventures continue. They visit a place cal Floriana. A combination of Florida and Louisiana. There the king is hogging all of the riches and only allowing a few people to become rich. The couple are given a guided tour that only shows them what the kings assistant wants them to see. Their friendly shapeshifting friends make an appearance and a gate opens up to help them win the war. There is also a flood, rescue, and a baby on the way. My only issue is the narrator. This bothered me in the first book but it seems worse in this one. She stops in the middle of sentences and her cadence is so far off that it brings you out of the story waiting for her to finish the sentence.

Both the story and narration are a leap forward

What did you like most about A Question of Loyalty?

*I did not pay for this audiobook* I really liked how much of a step forward the book was compared to the former. The gap of differance between the two is pretty large. While the books writing style and what not remains the same a key differance is how much time has passed between the two books. We don't hear about the world of politics in Washington as I expected and was pleasantly suprised to be taken along on a late honeymoon and holiday.

I remain a large fan of the shifters in general. Be them wolves or kitties, compared to the former book the prevolence is much smaller in this book which is a shame but refreshing when they did crop up form time to time.

What does Ashley Holt bring to the story that you wouldn’t experience if you had only read the book?

As someone who is dyslexic the ability to have this book as an audiobook is a big plus and wouldn't be possible without narrators willing to read/record. Ashley Holt's narration has improved along with the books leap forward in time. Complaints about a sing-song voice from the former book have been resolved with a much more pleasant normal-sounding narration voice. I only wish the sing-song style had remained for some of the voice acting as well as a larger range of voice acting for each distinct character as it can be confusing to tell who is speaking once or twice. There are some background noise that seems to be Ashley readjusting in a chair during the recording, nothing overly prevasive but could have probably been edited out or re-recorded.

"What are you doing on holiday?" Is the first thing that jumps to mind (Probably one of the worst movie taglines) but reading the book there where several points where like a movie-go'er watching a horror I wanted to just shake mostly everyone and demand to know "What the hell are you doing". If your not okay with an audiobook being a non-interactive experiance this book will be a rough ride.

Nate and Caroline's adventure continues where the previous book in the series ended. This time they intentionally find themselves south of the border, in Floriana. In this historical, fantasy version of the United States, several of the southern states had been locked out of the US to prevent the spread of the plague. Our characters are part of the movement to reopen the borders, some 80 years on, with the blessings of the American monarch. Their sudo-holiday to Floriana has the dual purpose of being the couple's holiday and their opportunity to explore Floriana to report to the king.

It should be that simple, but it isn't. Between the attempts to murder them, the annoying guard, the unpredictable weather and all around craziness, this book is an adventure more than a romance. The political climate changes as the plot progresses and with that there are big decisions to be made.

I enjoyed the adventurousness of the story. Sandy Burney has a fantastic ability to weave the fantasty with reality to make an interesting, almost realistic tapestry. That is, if werewolves and other people with supernatural abilities existed!