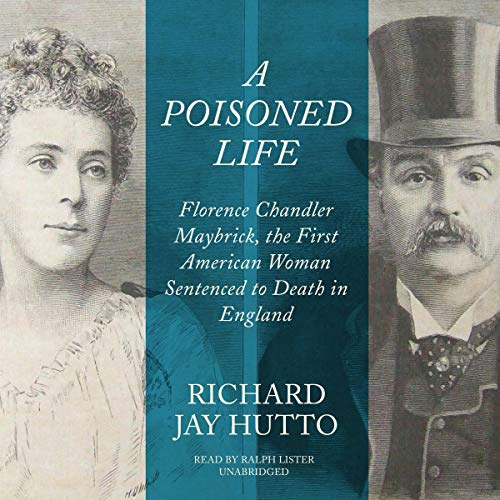 By: Richard Jay Hutto
Narrated by: Ralph Lister
Try for $0.00

Florence Maybrick was the first American woman to be sentenced to death in England - for murdering her husband, a crime she almost certainly did not commit. Her 1889 trial was presided over by an openly misogynist judge who was later declared incompetent and died in an asylum. Hours before Maybrick was to be hanged, Queen Victoria reluctantly commuted her sentence to life in prison - in her opinion a woman who would commit adultery, as Maybrick had admitted, would also kill her husband.

Her children were taken from her; she never saw them again. Her mother worked for years to clear her name, enlisting the president of the United States and successive ambassadors, including Robert Todd Lincoln. Decades later, a gruesome diary was discovered that made Maybrick's husband a prime Jack the Ripper suspect.

What listeners say about A Poisoned Life

There's nothing new here about anyone named Maybrick. But if you're looking for minutiae about Florence's mother's parents, husbands, neighbors, in-laws, friends, and all of their wee scandals and notable relations that have zero bearing on Florence's story, boy, have I got great news for you.
Otherwise, it's a sleepy slog for no payoff re: any Maybricks by blood or marriage. Learning that Empress Eugénie had an American dentist lent nothing to the case purportedly being discussed.

The good news is that you'll learn a lot about the Southern families, both antebellum and post-Civil War, and a lot of high-falootin' European aristocracy. The author may have been better served creating a slightly more modest goal, and telling the meat of the story, which is compelling in its own right, and foregoing all the tangents on acquaintances and distant relations.