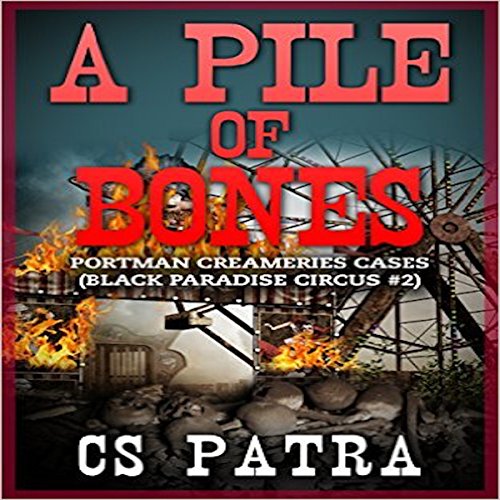 A Pile of Bones

By: CS Patra
Narrated by: Zachary Liebenstein
Try for $0.00

Meet the girls of Portman's Creameries as they tackle one of their biggest cases. Join Irene, Chrissie, Pippa, Becca, Mary Beth, Stacey and Winky as they step into the Black Paradise Circus and the strange mystery ahead.

After one of the kidnapped children is found gruesomely murdered, the stakes go up and everyone realizes they are running short on time. Irene refuses to come out of her room as she deals with demons from her past. Secrets are dug up from the circus grounds which makes the girls realize how close they are to the circus itself. Who are these people? What are they hiding? Things continue to get harder as they work to keep the circus on their side while trying to solve the case.

All the same, the main problem remains; the children are missing. Will the girls be able to find them before it's too late?

What listeners say about A Pile of Bones

I liked the idea of the book. I liked the direction it was trying to go in and the plot of the story was interesting. However, the writing style was very hard to get past. It was very long winded and it had trouble keeping my attention. Had this story been written differently, I probably would have really liked it. There was a lot of attention to detail, and the characters were already well developed which was good, and made for great imagery, but also took away from a lot of the action, for lack of a better word. Attention to detail is good, but there is such a thing as too much. It got monotonous. The characters weren't terribly unique or lovable either. Overall, I would say this book is alright, but I wouldn't go around recommending it to people. It feels as though this book was a rough draft of something much better.

The Ladies from the Creamery are at it again..


This story reminded me a lot of The Sugar Mountain Murders: Portman's Creamery Mysteries.

The Ladies from the creamery investigate the disappearance of children from the circus as well as a murder.

Zachary Liebenstein did ok with the narration.

Note:
"This audiobook was provided by the author, narrator, or publisher at no cost in exchange for an unbiased review."

Creepy in a good way

This series has become much more interesting. In the first book I had difficulty taking the characters seriously. It was like they were caricatures of themselves. In this book I was able to listen more to the story than the characters which helped. The narrator is very talented - I love his speaking voice - but some of his female characters were so annoying and cartoonish I had to transcend his voice and pretend I was reading it myself. This book is much more serious than I gave it credit for in the first book.
I was gifted this audiobook in exchange for an honest review.

I really liked the story line , I liked the fact that the book was not real long. the long books seem to just ramble on about the same stuff over and over very boring after a while. I thought it was the snake lady you will have to read it to find out. I received this book free from the narrator and or narrator for a honest review and unbiased option via audio book boom

Poor narration choice for the cast of characters..

I received this audiobook for free in return for my honest review....such a shame, the description of the book sounded so good, but the one narrator (male) trying to do different voices for several different characters (all females) was very distracting. Some of the voices were so "fake" that I couldn't concentrate on the actual plot for very long. I could not finish the first hour unfortunately.

I finished this book yesterday, and it has taken me until now to realize I really didn't get into this book. The girls from the creamery are investigating the disappearance of children from the circus. Then body turns up, murdered in the most gruesome way. Will they solve the crimes before more children are murdered?